In this morning’s roundup of Oscar news ‘n’ notes from around the web, “60 Minutes” showcases “Avatar,” Santa Barbara honors a quartet of actors and that “New Moon” money won’t impress Oscar.

The Santa Barbara International Film Festival singles out four Oscar-contending actors for its Cinema Vanguard Award. Vera Farmiga, Peter Sarsgaard, Stanley Tucci and Christoph Waltz will receive their honors on February 12, by which point I expect that two or three of them will be Oscar nominees. (By my reckoning, Tucci and Waltz are shoo-ins, Farmiga and Sarsgaard richly deserving but on the bubble.) In past years, SBIFF has only given out one Cinema Vanguard Award – Kristin Scott Thomas got it last year, Ryan Gosling the year before – but handing out four certainly makes sense if the idea is to give a boost to some awards candidacies. And that’s certainly one of the things they do in Santa Barbara … as well as in Palm Springs the previous month, when Farmiga’s “Up in the Air” co-star and fellow supporting-actress contender Anna Kendrick will get her own award. (The two festivals always pick different slates of honorees; no doubling-up allowed.) (Santa Barbara International Film Festival website) 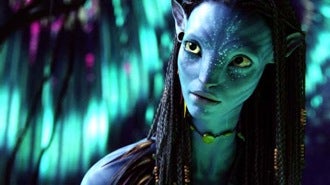 “60 Minutes” devotes 13 of those minutes to James Cameron and “Avatar.” Cameron explains, Morley Safer casts it as the telling point for 3-D in Hollywood, and chunks of footage are showcased. Cameron discusses his reputation for being obsessive and demanding: “Don’t get on the boat if you’re not ready to go all the way.” He also looks forward to doing “Avatar 10” – which, given the rate at which he makes films, will come when he’s about 150. (CBS)

Sasha Stone surmises that the prestige of a “60 Minutes” profile will help give “Avatar” credibility among older Oscar voters who wouldn’t otherwise be attracted to James Cameron’s sci-fi extravaganza. She also likes the footage she sees of the film’s alien creatures: “Trust me,” she writes, “the Na’vi look a helluva lot more convincingly lifelike in high def than Andy Rooney does.” (Awards Daily)

Tom O’Neil gives a forum to Tariq Khan of Fox News, who comes up with what he thinks are the 10 closest Oscar acting races of the past 20 years. His list includes Jim Broadbent over Ian McKellen, Juliette Binoche over Lauren Bacall, Kevin Spacey over Denzel Washington … My question: how the hell does he know? Answer: he doesn’t. (Which he admits.) Rick Rosas, Brad Oltmanns, Greg Garrison and a few others know – but even then, none of them know over a 20-year stretch, because nobody at PricewaterhouseCoopers works the Oscars for that long. And Rosas swears to me that he forgets after a while, though I suspect he probably remembers the really close ones.  (Gold Derby)

Peter Bart looks back at the Governors Awards and ahead to the Oscar show, and asks a question: “If the Governors Awards can be spirited and entertaining, why must Oscar night itself be such a stiff?” He theorizes that one difference, besides the pressure to deliver big ratings on the Oscarcast, is that the Academy now obsesses “over little arthouse movies,” while Governors Awards honorees like Roger Corman and Lauren Bacall represented a time when “Hollywood related more felicitiously to pop culture.” Seems to me that’s the fault of the studios who are making movies, not the Academy members who are voting for them. (BF Deal Memo)

So “The Twilight Saga: New Moon” had the third best opening weekend of all time. The record-holder, “The Dark Knight,” got eight Oscar nominations and took home two awards. The second-place film, “Spider-Man 3,” was shut out by the Academy (though its two precedessors got five nominations and one win between them). Here’s betting the “New Moon” total is a lot closer to Spidey than to Batman. (The Wrap)