In this morning’s roundup of Oscar news ‘n’ notes from around the web, Jason Reitman gets frequent-interview miles, and more reactions swirl around the big movies starting to screen.

The New York Times and the Los Angeles Times both talk to “Up in the Air” director Jason Reitman. The big difference: he meets the NYT’s David Carr in an airport, but sits down with  LAT’s Rachel Abramowitz in an airport hotel. Both writers have the sense that it’s a setup, but Reitman charms them the way he’s charmed everybody else this awards season. The L.A. Times, meanwhile, also considers the “thorny marketing challenge” posed by the film. Apparently, a dramatic comedy about a serious subject (unemployment and corporate downsizing) isn’t what young audiences want or what studios know how to market. One would hope that a) starring George Clooney, and b) being very good would help. 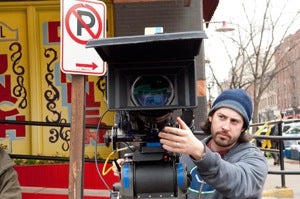 Film School Rejects, though, take a completely different approach to Reitman: they take his celebrated pie chart documenting the questions he’s been asked the most often, and fashion entirely new questions based on his thumbnail descriptions of the common queries. “Miles,” for instance, which obviously refers to a question about his accumulation of frequent-flyer miles, becomes “What’s your favorite Miles Davis record?” Reitman gamely plays along, of course. (Reitman photo: Paramount Pictures)

In his “16 Weeks to Oscar” column, David Poland talks about how silly it is to predict what films might win Academy Awards at this point. Then he lays out the case for why “The Hurt Locker” might win. As somebody who said something similar back on August 31 (when it was definitely WAY too early to be predicting winners), I think his arguments make pretty good sense. (Movie City News)

Poland then does a video review of “The Lovely Bones,” after earlier castigating other reviewers (mostly Variety’s Todd McCarthy) for writing “lazy criticism.” After a single viewing he’s not sure if it’s one of the best movies of the year, but he finds brilliant things about it and thinks it’s “very powerful” and “a fascinating piece of work.” (The Hot Blog)

Jeff Wells makes a plea to Oscar pundits to post a list of their own favorites instead of just predicting what’s going to be nominated. Actually, he thinks we should let personal preference affect our predictions, as well. I promise I’ll make a list of my personal faves, Jeff – just not yet, not until I’ve seen everything that deserves to be seen. I mean, it’s not even December yet – give us a couple of weeks, okay? (Hollywood Elsewhere)

Wells doesn’t wait, though – he publishes the list of the 17 films from this year that gave him “pure pleasure.” At the top of his list are “The Hurt Locker” and “Up in the Air” (can’t really argue with that), followed by “Broken Embraces,” “Collapse,” “A Serious Man,” “An Education,” “In the Loop,” “Sin Nombre,” “Public Enemies” and “Humpday.”

In Kris Tapley’s and Anne Thompson’s latest Oscar Talk, they talk about the Big Four. “The Lovely Bones”: he thinks it’s “dangerously close to a masterpiece,” but needs to see it again; she thinks Saoirse Ronan and Stanley Tucci are the best things about it, but thinks the critics will be tough on it. “Invictus”: she most likes the movie, he mostly doesn’t, and they both agree that Clint Eastwood throws in a couple of awful songs. “Nine”: she calls it a “guilty pleasure,” stylish but slight; he thinks it needs to be longer to flesh out what happens in between the songs. Also, for what it’s worth, one of Anne’s guests for Thanksgiving dinner had seen “Avatar” and thought it was brilliant. (Thompson on Hollywood) (In Contention)