In this morning’s roundup of Oscar news ‘n’ notes from around the web, quizzes, predictions, nominations, controversies and a question: does the Oscar show have too much Jack?

The British Independent Film Award nominations have been announced. “Fish Tank,” from director Andrea Arnold, who won an Oscar for her short “Wasp,” leads the pack with eight nominations; it won’t figure in this Oscar race because it’s not getting an U.S. release until 2010. The other nominees for the best British independent film are “An Education,” “In the Loop,” “Moon” and “Nowhere Boy.” (indieWIRE)

Sasha Stone makes an Oscar quiz: “1. Name the movie: Four Oscar nominations, one win, but not Best Picture. Hint: Someday Oscar winner in smallish but pivotal role.” She makes it sound easier than it is. I don’t know some of these, and I do this for a living. The questions are here, and the answers are here. (Awards Daily) 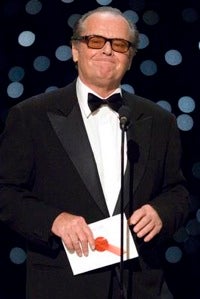 Nathaniel Rogers looks at the Oscar show and runs the numbers on who presents the best-picture award. His conclusion: they ought to spread it around more, and stop choosing Jack. Among the people he’d rather see get the gig are, um, Brad Pitt and Angelina Jolie. (The Film Experience)

Guy Lodge looks at Rogers’ suggestions and throws his vote to Meryl Streep. (In Contention)

Scott Feinberg’s updated predictions: “Inglourious Basterds” and Christoph Waltz are up, “Amelia” and Hilary Swank are down. (And the Winner Is)

Dave Karger hears that Paramount will definitely campaign for Vera Farmiga in the supporting-actress category for “Up in the Air,” rather than avoid a conflict with the film’s Anna Kendrick by pushing for a best-actress nod. Makes sense to me – it’s definitely a supporting role and I don’t think they had much shot at persuading Oscar others otherwise – but I hope Farmiga’s vibrant but subtle work isn’t overshadowed by Kendrick’s flashier role. (Oscar Watch)

In the Guardian, David Cox suggests that the documentary “The Cove” could be dangerous because it focuses on the inhumanity of killing cute dolphins while ignoring other animal-rights issues. I’d suggest that he might be asking too much of a documentary if he wants it to cover ALL animal rights issues in 90 minutes – focusing on single issues is kind of what most documentaries do – but I doubt he’d listen; this, after all, is a guy who says, “…[T]hey may be more intelligent than people. Why, however, should that entitle them to special treatment?”