Anne Thompson says that Harvey Weinstein’s acquisition of “A Single Man” makes star Colin Firth “a slam dunk for his first Oscar nomination,” because the movie offers Weinstein “an Oscar move that he knows how to play.” Maybe she’s right, but “slam dunk” seems awfully strong, especially in a category that looks to be as crowded and competitive as ever. And Harvey’s also going to be trying to sell Viggo Mortensen in “The Road,” so he’d better be pretty damn evenhanded with those trade ads … (Thompson on Hollywood)

The rumor is floating around that Weinstein might move Rob Marshall’s “Nine” into 2010 lest he run out of Oscar-campaign money. He wouldn’t dare, would he? (The Hollywood Reporter) 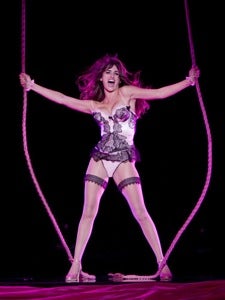 No, he wouldn’t, swears David Poland, who’s clearly getting the skinny from somebody in the know about the film’s test screenings and editing battles. But the last three words of his denial (“Here’s the deal: ‘Nine’ is not being moved to 2010 at this point”) obviously leave some wiggle room. (The Hot Blog) (Right: Penelope Cruz in "Nine." Photo: The Weinstein Company)

John Foote sits down with potential Oscar darling Robert Duvall. Another best actor contender, right up there with Viggo and George Clooney and Matt Damon and Jeremy Renner and Morgan Freeman and Daniel Day-Lewis and Clive Owen and Robert DeNiro. And Colin Firth. (In Contention)

Scott Feinberg adjusts his exhaustive predictions chart based on what’s happenes so far in Toronto. Moving up: “Up in the Air,” “Precious,” “An Education,” “Fantastic Mr. Fox,” Viggo Mortensen, Clive Owen, Carey Mulligan, Gabourey Sidibe, Peter Sarsgaard, Mo’Nique, Anna Kendrick. Going down: Matt Damon (“The Informant!”) and Michael Stuhlbarg (“A Serious Man”). Nobody else. (And the Winner Is)

A few years back, director Niko Caro’s “The Whale Rider” got an Oscar nomination for Keisha Castle-Hughes. Caro’s back with “The Vinter’s Luck” which the Hollywood Reporter is pretty sure will get no nominations for anybody.

Under pressure, the Toyko International Film Festival has decided at the last minute to show “The Cove” after all. But it won’t be in competition, and it’s too late to be listed in the official festival program. (The AP via Yahoo! News)

Oops. Turns out that Jeff Wells wrote his rave review of “Mother and Child,” anointing it an instant best-picture candidate, without having seen the last half-hour of the movie. So he went back and saw it today – and, well, what do you know, he thinks the ending is the weakest part. His readers subsequently give him hell for not mentioning in his original review that he hadn’t seen the whole movie. (Hollywood Elsewhere)