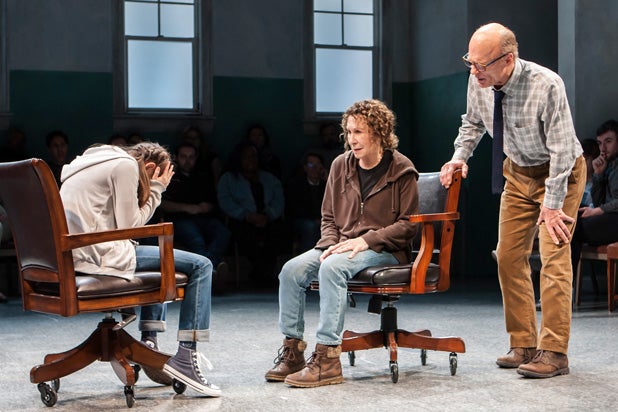 Shrinks are something of a dramatic cheat in movies and plays. They’re an easy way for writers to get a character to spill his or her gut as quickly and effortlessly as possible. Great drama, on the other hand, is what drives a character to that point of total exposure.

David Rabe’s “Good for Otto” features not one but two therapists, played with great charisma and easy style by Ed Harris and Amy Madigan. During the course of this two-and-a-half-hour drama, a whole slew of emotionally challenged individuals walk into their small-town Connecticut mental-health center.

If you crossed “Our Town” with “A Chorus Line,” you have Rabe’s 2015 play, which received its New York premiere Thursday at the Pershing Square Signature Center. And yes, there is much singing and dancing in “Good for Otto,” because Harris’s Dr. Michaels believes song to be very therapeutic.

Singing also reminds him of his happier moments with Mom, who committed suicide when he was 9 years old. That mother (Charlotte Hope) is now a ghost whom Dr. Michaels can’t get out of his head. Unfortunately, Rabe can’t keep her out of his play. Not only does the ghost of Mom nag at her doctor son, she also carries around on her back, at times, a troubled little girl (Rileigh McDonald), a patient with whom the doctor too closely identifies for obvious reasons.

Dr. Michaels’s repertory of “Row, Row, Row Your Boat” songs is pure cornball, as are most of the villagers who visit his clinic. In true Stage Manager style, Dr. Michaels tells us upfront that the clinic is in a small town in Connecticut and that the Jewish synagogue is across the river in New York State. I have a feeling these patients would improve immeasurably if they just moved across the river.

The folksiness of their completely white world is cloying, at best, and unbelievable outside a Frank Capra movie. The modern world does intrude at the beginning of act two when a young person of color (the extremely mannered Maulik Pancholy) enters the clinic to timidly reveal his big secret. He’s homosexual. Let the tears begin. By the “modern world,” I’m talking early 1970s, as opposed to the Hollywood 1930s of the first act. Rabe’s gay character is so self-consciously pathetic he makes Paul in “A Chorus Line” look like a leader of Act-Up.

Rhea Perlman manages to be understated as a harried foster mother. F. Murray Abraham is typically grandiose playing an old man on the verge of senility. And Mark Linn-Baker makes being socially inept a comic choice. The Otto of the play’s title refers to the pet hamster owned by Linn-Baker’s character. Otto is undergoing abdominal surgery. It’s unsure what happens to the lonely, desperate gay guy, but Otto comes through with flying colors, much to everyone’s relief.

Scott Elliott’s direction wrings out every dollop of schmaltz in the script. “Good for Otto” even ends with Dr. Michaels being bathed in falling snow. It’s all very MGM, but in a relevant way.