Not everything that happened at Saturday night’s Governors Awards ceremony fit into theWrap’s initial report on the evening.  Herewith, more random happenings, tidbits and musings from the lengthy, emotional evening, the first of its kind and the first significant Oscar event of the season:

Given the event’s low profile and only 550 guests, the usual Oscar crowds were nowhere in sight – not that the public could have gotten a glimpse of any of the attending luminaries, whose cars were routed through a roundabout path, entering from the back of the Hollywood & Highland complex and traveling down the ramp that leads to the Kodak Theater’s loading dock, before entering the underground parking garage. Since guests had been warned that the entry required making a turn too tight to accommodate a stretch limo, the big vehicles so prevalent on Oscar night were nowhere to be seen. Instead, the valet line was full of BMWs, Lexii, Priuses, and enough smaller vehicles that my Honda Accord didn’t even seem out of place.

Once out of the car, guests never set foot in the public areas of Hollywood & Highland. Instead, they entered the Kodak Theater lobby from the garage, and immediately took a theater elevator to the fifth floor, where the Grand Ballroom is situated. Any shoppers hoping to catch a glimpse of, say, Jack or Tom were out of luck. 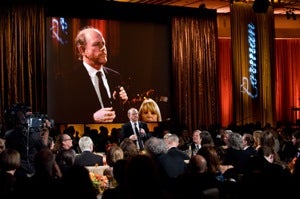 Speaking of Jack Nicholson, he slipped into the pre-show reception late, and lurked inside the entrance in shades and a black shirt. He sat at Roger Corman’s table until Corman received his honor, then immediately left. Steven Spielberg, on the other hand, didn’t arrive until the middle of the Corman tribute.

During the reception, Rick Rosas of PricewaterhouseCoopers, one of the two partners who supervises Oscar voting and knows all the results, mingled with other guests. When I mentioned that he didn’t have to do any counting for these particular Oscars, Rosas nodded. “Yeah,” he said, “but I’ve memorized the layout of the room, just in case.”

Francis Coppola, who directed one of his first movies for Corman and used Gordon Willis for all three “Godfather” films, did not attend the event. But he was there in spirit, or maybe in spirits: the wine served at the event came courtesy of the Francis Ford Coppola Winery.

Ron Howard, who toasted Corman to begin the awards presentations, had ties to three of the four honorees. He played Lauren Bacall’s son in “The Shootist,” directed “Grand Theft Auto” for Corman, and made a couple of movies for John Calley. Of Gordon Willis, Howard said, “I offered him movies, but he turned me down.”  (Photo of Howard’s toast, above, by Richard Harbaugh/AMPAS)

Bill Mechanic and Adam Shankman, the producers of the main Oscar show on March 7, were on hand as well. Although they haven’t announced any hirings beyond set designer David Rockwell, the pair spent time with two of the key personnel at every Oscar show for the past three decades: associate producer Michael Seligman, the show’s longtime money man, and executive in charge of talent Danette Herman, who has been booking and attending to the stars for just as long. Herman confirmed that she is working on the upcoming Oscar show, though first she and Seligman will head to Washington D.C. for the Kennedy Center Honors.

Wrapping up his toast in honor of Willis, Caleb Deschanel quoted what he said was one of the cinematographer’s favorite lines when things were running slowly on the set: “Let’s go, folks. The earth is rotating.”

Though thousands of words were spoken in honor of each of the night’s recipients, the official designation on their awards was far more succinct. For John Calley, it was the Thalberg Award boilerplate: “for a consistently high quality of motion picture production.” For Willis, it read “for unsurpassed mastery of light, shadow, color and motion.” For Corman, “for his rich engendering of films and filmmakers.”

And for Bacall, curiously, the citation made no reference to the quality of her work, but only to her stature and stardom: “in recognition of her central place in the golden age of motion pictures.” 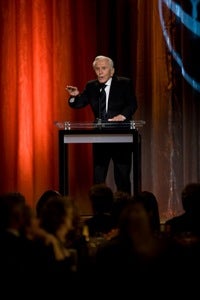 The best Bacall anecdote came from Kirk Douglas (right; photo: Michael Yada/AMPAS), who told of a time when the actress danced at an event with the Shah or Iran. According to Douglas, the conversation went like this:

Shah: “Miss Bacall, you are a wonderful dancer.”

Bacall: “You bet your ass, your majesty.”

Past Thalberg winner Norman Jewison talked about how delightful it was to be “celebrating excellence without any television cameras.” Then he took advantage of the lack of time constraints by going off on a tangent, asking Gordon Willis if he remembered making the 1970 movie “The Landlord” with director Hal Ashby. “You were probably out of it,” he said. “I think Hal was passing around some bad weed.”

Afterwards, as she posed for photos for a battery of photographers (including, unbeknownst to her, Marisa Tomei, who was snapping shots with her cellphone from the back of the crowd), Lauren Bacall learned just how weighty an Oscar can be.

“Shit! It’s too heavy!” she exclaimed. But she didn’t relinquish her hold on the statuette; instead, she gave her purse and program to a guest, then gripped Oscar with both hands.

As the crowd started to disperse, a woman approached Caleb Deschanel. “’(500) Days of Summer’ was my favorite movie of the year,” she told the cinematographer and Academy governor, whose daughter Zooey stars in the film. “That’s great,” said Deschanel. “I hope lots of other people agree with you.”

Afterwards, there was an expected jam at the valet station on the first level of the parking garage. Tom Hanks and director Julie Taymor waited for their cars alongside critic Leonard Maltin and assorted Academy guests, while Deschanel explained to a friend how egregious the Academy’s past snubs of Gordon Willis really were. (“They nominated him for ‘Godfather III,’ but not for ‘Godfather I’ and ‘II,’ can you believe it?”)

A few stars had chauffeur driven town cars waiting for them as soon as they got to the valet area – including Warren Beatty, who walked all the way around his car to personally shut the passenger-side door for his wife Annette Bening, before getting into the driver-side door himself.

[This story has been edited since its original posting, and a photograph changed.]