Looks like Season 2 of HBO Max’s “Gossip Girl” reboot is about to get a whole lot messier.

On Wednesday, the series’ social media accounts shared a grainy video of a brunette woman sitting in an empty theater, clapping at whatever (or whomever) is on stage.

“It only takes one spark to start a fire,” the video teases. In the caption, the message continues: “And I have a feeling that this city is about to burn.”

While it’s not totally clear who is in the video, it sure does look like Michelle Trachtenberg — which would mean that Georgina Sparks is returning to New York City. Showrunner Joshua Safran gave another hint about the mystery person’s identity on Twitter when asked who the messiest character in Season 2 will be.

“How do you define messy? Fun on purpose messy or destruction messy?” he replied. “Same answer, I guess — see the post from GG today.”

Those hints would make sense if the mystery woman is, in fact, Trachtenberg, considering Georgina has been known to cause quite the stir. The character is at the top of many fans’ wish lists in terms of appearances from the original “Gossip Girl” cast. The reboot even set the stage for her possible return in Season 1 when we were introduced to her 10-year-old son Milo (played by Azhy Robertson).

Viewers may recall that Georgina gave birth to Milo in Season 4 of “Gossip Girl.” She initially convinces Dan Humphrey (Penn Badgley) that he is the father, but it later comes out that he’s actually the son of a Russian man Georgina met on a plane named Serge. Milo now attends the Constance Billard-St. Jude’s School. In Season 1, he offers to help Zoya wage war on her sister Julien. “My mom taught me early on that it isn’t enough to go to war,” he says in the episode. “Wars never end. What you need is a coup.”

In another scene, Zoya joins Milo at his home to scheme. On the walls, there are several photos of Georgina centered around a shrine to none other than Blair Waldorf (Leighton Meester).

We have no idea how Georgina’s story might play out in Season 2, but there’s no doubt that if it happens, it’ll be juicy. 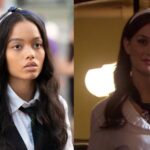 Also Read:
‘Gossip Girl’ Reboot: Here’s Every Reference Made to the Original in Season 1