The first part of Season 1 of the continuation of The CW’s iconic teen drama launched July 8, with “Gossip Girl” becoming the best launch for an HBO Max original drama series this year. The remaining six episodes of the show’s first season will debut on the WarnerMedia-owned streaming service in November.

Featuring the original show’s narrator Kristen Bell returning as the voice of the titular character, HBO Max’s “Gossip Girl” explores just how much social media — and the landscape of New York itself — has changed in the intervening years since the CW series ended its six-season run in 2012.

Safran told TheWrap that he strived to make the new “Gossip Girl” characters different from Blair Waldorf (Leighton Meester), Serena van der Woodsen (Blake Lively), Chuck Bass (Ed Westwick), Nate Archibald (Chace Crawford) and Brooklynites Dan Humphrey (Penn Badgley) and Jenny Humphrey (Taylor Momsen). But he also had to embrace the reason why it’s so hard to break away from those people when telling this kind of story.

“I was like, well, there’s always a Chuck, there’s always a Max. In Oscar Wilde’s work and ‘Bright Young Things’ there’s the dandy. The Shakespearean characters, the Edith Wharton characters. They’ve existed throughout time in literature and in art,” Safran said. “But I do think these characters stand on their own. I do think they are different. I think that any similarities were not intentional, but also unavoidable because those archetypes exist.” 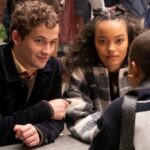