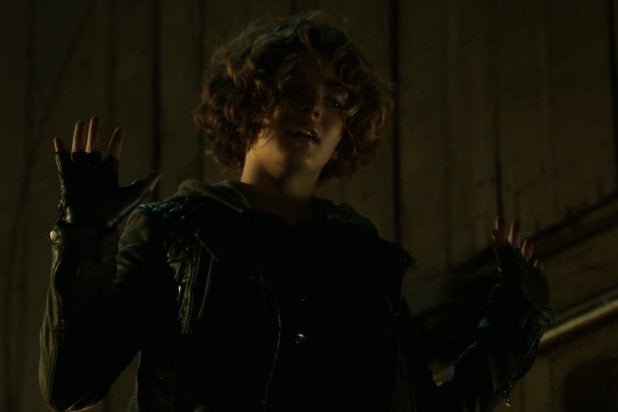 Spoiler alert: Please do not read on if you have not yet watched Fox’s “Gotham” Season 2, Episode 2 entitled “Selina Kyle.”)

Camren Bicondova is a principal cast member on Fox’s “Gotham” and Selina Kyle — better known as Catwoman to Batman fans — is one of the most prominent characters in Bruce Wayne’s adult life. Yet she didn’t have a single speaking line in the series premiere. That all changed with the second installment.

Selina took center stage when a pair of child abductors started taking homeless children from the streets. She escaped their first attempt, but later in the episode she wasn’t so lucky. It was the overall corruption of Gotham — which reached ridiculous heights in this sophomore outing — that did her in.

The police chief made it very clear that she wanted Det. James Gordon (Ben McKenzie) to get with the program, one of the beat cops outright admitted to getting paid by business owners to protect their interests and Richard Kind‘s mayor is so openly corrupt and despicable it’s outright laughable.

This is the world Gordon lives in, and it’s even more cartoonish than we imagined. With this much blatant corruption all around him — and no indications that there is anyone else decent working for the city so far — his overall mission to clean out the corruption from the inside looks more hopeless than ever.

After rescuing a group of orphans from the snatchers, the mayor sent a batch of them upstate, to what Gordon called juvenile prison. Out of sight, somebody else’s problem. But when one bus got snatched, he had to act.

This time, Selina couldn’t get out of it, as she was on the bus. But she did manage to escape detection and escape after they arrived at their destination. This scene had me really questioning Lili Taylor‘s character. Selina was a part of the group they approached at first, and even verbally rejected their offer of food — and yet Taylor didn’t seem to notice she disappeared.

Then, Selina tried to escape on the bus and Taylor pulled a gun on her. You’d think this second encounter might make her remember Selina’s face, but she didn’t realize who was missing when they realized the count was wrong. Then, when Selina escaped, she simply dismissed it as an apparent error.

Not very observant, or a statement on how little she thought of these kids as even human? Or, as is more likely, simplistic and lazy writing. Get from point A to point B and never mind the logic between. Comic books have a long tradition of ridiculous logic, so maybe it’s just a part of the show’s reality. Don’t overthink it and enjoy the ride. Pretend it’s a “Transformers” movie.

After a last-second save by Gordon, Selina was once again on her way upstate, but this time she used blackmail to get some face time with Gordon. She told him that she had seen the face of the Waynes’ killer, plain as day. That makes this 13-year-old girl suddenly his best lead in the ongoing case, and it ties her emotionally to Bruce Wayne’s (David Mazouz) story.