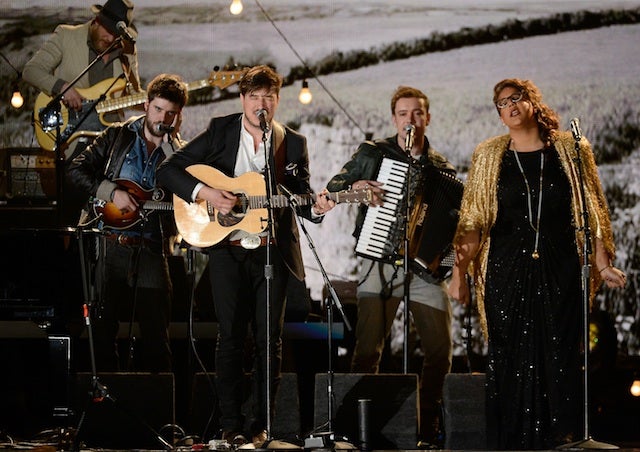 Gotye, fun. and Mumford & Sons split the top three awards at the Grammys on Sunday night, capping an awards show that featured tributes to Bob Marley and The Band drummer Levon Helm as well as the return of Justin Timberlake.

No single artist dominated the awards show like Adele did last year, and the British songstress scored another trophy this year for Best Pop Solo Performance. Instead, several musical acts won a few awards. Gotye (left), a Belgian-Australian musician, won three awards, including Record of the Year for "Somebody That I Used To Know." That song, now almost two years old, topped the charts in more than 30 countries around the world and inspired endless covers, from TV show "Glee" to popular YouTubers like Sam Tsui and Boyce Avenue.

fun. took home a pair of trophies and upon receiving the Song of the Year award for "We Are Young," lead singer Nate Ruess joked that the band was not young. It then won Best New Artist. Go figure.

Mumford & Sons, who first made a big impression on the American public playing alongside Bob Dylan at the Grammys two years ago, also won a pair of awards — one for their second album, "Babel," and another for Long-Form Music Video.

Frank Ocean, who released one of the best reviewed albums of the year, missed out on most of the night's biggest awards. He still took home two Grammys — one for Best Urban Contemporary Album and another for his contributions to Jay-Z and Kanye West's "No Church in the Wild."

Also Read: Frank Ocean Beats Chris Brown, But Not the Way You Were Hoping

That song won Best Rap/Sung Collaboration, and was one of three wins on the night for West and Hova. The two also took home two of the top prizes in the rap categories, winning both Best Rap Performance and Best Rap Song for the song “N—– in Paris.”

The biggest winner on the night was Dan Auerbach, the guitarist and lead singer of The Black Keys. He earned four awards, three with Patrick Carney for the Keys' latest album "El Camino," and one as Producer of the Year for his work on albums like Dr. John’s “Locked Down” and Grace Potter & the Nocturnals’ “The Lion The Beast The Beat."

Other repeat winners include Carrie Underwood and Skrillex. See the ful list of winners below.

Pop/duo group performance: "Somebody That I Used to Know," Gotye featuring Kimbra. Hard rock/metal performance: "Love Bites (So Do I)," Halestorm. Children's album: "Can You Canoe?," The Okee Dokee Brothers