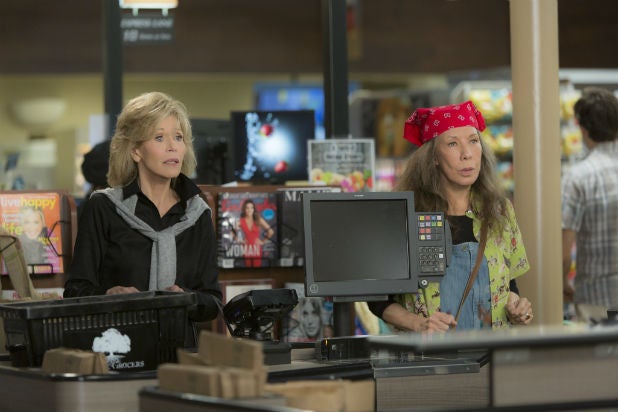 To say Marta Kauffman and Howard J. Morris’s new Netflix comedy “Grace and Frankie” is “a little complex” is a bit of an understatement.

“We started with having Jane Fonda and Lily Tomlin,” Kauffman told TheWrap in an interview.

“It was a matter of finding an idea that we thought would suit them, that had enough elegance for actors of that stature and quality.”

What writers wound up with was a single-camera comedy that tackles what happens to two 70-something wives and their families when their husbands leave them – for each other. WASP-y Grace (Fonda) and flower child Frankie (Tomlin) are both left to grapple not only with divorce but also learning that their life partners – Sol, played by Sam Waterston, and Martin Sheen‘s Robert – have been hiding their homosexual affair for decades.

As the show’s title suggests, Grace and Frankie are the main focus. But Waterston and Sheen brought a human element that smashed the “cheating ex-husband” trope to pieces.

“One of the things that they brought to it, that I really didn’t realize was there, was you care so much about their relationship,” Kauffman said. “I really thought it would just be – that you would care about the women and be kind of pissed at the men but you really care about those men, and that they make it work.”

Kauffman doesn’t like to think of “Grace and Frankie” as being topical, but the veteran showrunner definitely sees the subject matter as both current and outside the norm.

The series takes place in 2015 America, where gays have rights that a young Sol or Robert couldn’t dream of enjoying.

“It’s that generation that didn’t grow up in a world that had any willingness to accept them as gay,” Kauffman said. “They’re looking around and seeing all these people who are enjoying rights that they never felt they had access to.”

So the viewer winds up rooting for these two men who can be happy with each other for the first time in their lives, but at the same time hate them for lying to their wives and breaking their hearts.

But it also explores the lives of older people, complete with Cialis and back spasms.

“It’s about women – and men, for that matter – starting their lives over in their 70s,” Kauffman said. “It is a marginalized part of society, because they’re that age.”
“There’s nothing that explores what it is to be that age,” she added. “How many shows talk about vaginal dryness?”

It was that bluntness, perhaps, that made “Grace and Frankie” destined for Netflix. Kauffman said she and Morris knew the show wasn’t right for network – in part because ad-supported television eats up to a third of story time in commercials – and the streaming service was ultimately the ideal fit.

“They gave us an enormous amount of freedom and support,” Kauffman said. “Creatively, the notes we have gotten from them from the very beginning have been very smart.”

Also Read: Jane Fonda on Rupert Murdoch Buying Time Warner: 'It Would Be a Catastrophe'

“People want to do Netflix,” she said. “They want to do that work where they’re not just doing a pilot and then have to wait around and see if they’re going to, you know, have a job next year.”

“This is an ageist business,” the showrunner said. “There are some serious issues with that out there, and yet it doesn’t seem to change, especially for women in Hollywood.”

“Aging isn’t something that people want to talk about,” Kauffman added. “They don’t want to watch people as they begin to get smaller and wrinkle and all of that. A lot of people find that discussion distasteful.”

Despite the fact that “Grace and Frankie’s” cast is full of acting all-stars, Kauffman said she wants people to come away with a connection with the characters.

“They are the greatest actors of all time, and they are legends,” she said. “But when you do a show, you don’t want people thinking about the actors. You, hopefully, want them to be meeting the characters.”

That’s why you won’t be seeing Fonda and Tomlin’s old movie castmate Dolly Parton making an appearance – at least not yet.

As far as a second season, Kauffman said Netflix hasn’t ordered anything yet, but that producers “feel the love” from the streaming company. And if “Grace and Frankie” Season 2 is in the cards, Kauffman believes all four of the main actors would be on board to re-up.

All 13 episodes of “Grace and Frankie” premiere on Netflix Friday, May 8.