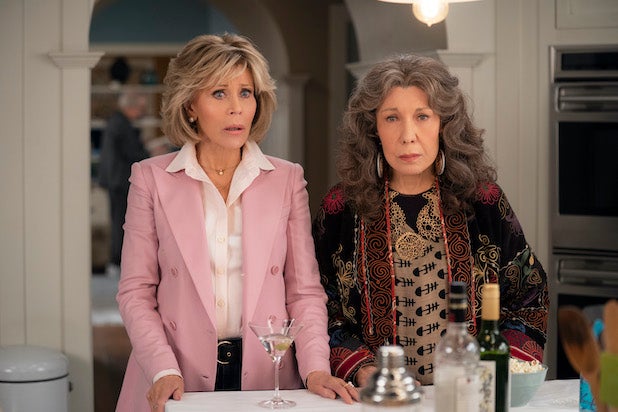 Before the sixth season of “Grace & Frankie” premiered in January, Netflix renewed the Jane Fonda and Lily Tomlin-led comedy for a seventh and final year with an episode order that will make it the streaming service’s longest running original series.

And though production began on Season 7 before the pandemic hit, co-creator Marta Kauffman is unsure when things will pick back up again for the series, given that it has to take into account something not every show looking to resume filming now that California has given the greenlight for projects to do so.

“We have shot through the middle of Episode 5. We are continuing the writers’ room. We are getting towards the end of the season in terms of the writing and we completely expect to be back at some point and shooting it — but I don’t know when,” Kauffman told TheWrap. “It really depends on how it goes. We’re not going to be the first show to come back because we have four lead actors who are older [Fonda, Tomlin, Sam Waterston, Martin Sheen], so we need to see how the protocols work.”

But when the time comes, Kauffman, who co-created “Grace & Frankie” with Howard J. Morris, knows how this tale of two best friends will come to a close, even after a season that saw the two growing further and further apart until the end.

“Of course we are going to end with Grace and Frankie together in some form, of course we are,” she said. “That’s what the show is about. As much as it’s about starting over, it’s about their friendship. But there is no fun in a friendship unless there is conflict. And this is a point where Grace and Frankie, after a year of Nick [Peter Gallagher], finally get to be back together, the two of them. And Robert [Sheen] and Sol [Waterston] are there.”

“Grace & Frankie’s” seventh and final season will take it to 94 episodes, making it the longest-running original show in Netflix history. Kauffman says that, though the decision to end the series was not her choice, the chance to go out on top is still “pretty freakin’ good.”

“Let me start with, it was not a creative decision to end it,” she told TheWrap. “It was in part a Netflix decision and we originally intended to do– we were hoping to do seven seasons, we made it to seven seasons — which is miraculous in this world — and I think because of the new Netflix model, they didn’t want to go past that. How does it feel to be the longest-running original series on Netflix? Pretty freakin’ good. It’s never what we expected from this show. We expected this show to be a sort of niche thing and the fact that it has taken on this life is pretty thrilling.”

As Kauffman said, she didn’t know the show was going to reach a larger — and younger — demographic when it premiered in 2015. And when viewers that weren’t senior citizens became “Grace & Frankie” fans, well, it was a bit of a shock.

Speaking of “Friends,” Kauffman gave TheWrap a bit of an update on the hit sitcom’s long-awaited reunion special, which was originally set to hit WarnerMedia’s new streaming service, HBO Max, at its May 27 launch, but was delayed due to the pandemic.

“We are hoping to be able to shoot in August, if all is well and there is no early second wave and the studio is open,” Kauffman said of the reunion, which will include original cast members Jennifer Aniston, Courteney Cox, Lisa Kudrow, David Schwimmer, Matthew Perry and Matt LeBlanc, as well as Kauffman and her “Friends” co-creator David Krane.

WarnerMedia Entertainment and Direct-to-Consumer chairman Bob Greenblatt said last month that the hope is to film the special — which will be shot on the original series’ Stage 24 of the Warner Bros. Studio lot in Burbank — by the end of the summer, and Kauffman confirms that’s still the plan.

Also Read: What 'Friends' Co-Creator Marta Kauffman Pledges to Do Differently After Admitting She Contributed to 'Systemic Racism'

“If everything is in place and we understand all the protocols and we can still make a good show, we’ll be shooting it some time, mid-to-late August.”

As HBO Max noted when the special was first announced, it will be an unscripted event. However, Kauffman says it will involve “ways of looking at this that doesn’t just feel like a mini-doc” and there will be “components that are fresh and new.”