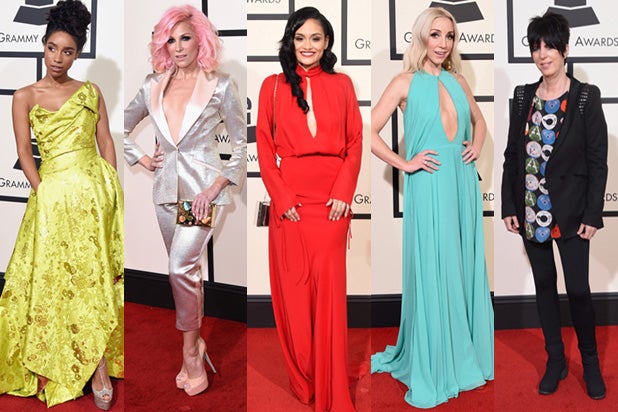 Music’s biggest stars gathered at the Staples Center in Los Angeles for the 2016 Grammy Awards.

Before they began hitting the stage to accept their trophies, stars like Lady Gaga, Taylor Swift and Adele strutted their most fashionable selves on the red carpet on what is considered one of the most daring fashion events of the year.

Below is the timeline of red carpet arrivals and social media reactions:

3:26 p.m.: BFFs and “Bad Blood” Grammy winners already Taylor Swift and Selena Gomez have arrived on the red carpet, after freaking out over their win in their dressing room earlier.

OMG!! I love @taylorswift13 model mouth!!!! She is going ALL IN posing!!#GRAMMYs

Just a couple of BFFs hanging out on a Monday night. #GRAMMYs pic.twitter.com/GW9YRsESWZ

3:30 p.m.: Cameras found Rihanna before she even made it onto the red carpet.

Still waiting for an invite to that House Party. ????

3:46 p.m. Ariana Grande‘s arrival is highly anticipated by fans – and she’s given everyone a sneak peek at her red dress:

3:51 p.m.: Zendaya showed up wearing a mullet, and is earning praise for it.

She never does the boring stuff ???? pic.twitter.com/3yKYVc50eC #Grammys

4:00 p.m.: “Empire” star and singer Serayah did an impressive impression of her favorite emoji.

4:25 p.m.: Justin Bieber won his first Grammy tonight, and wore the same tux he wore to his very first Grammys, in 2011.

Photos of @justinbieber and Jaxon on the red carpet at the #GRAMMYs pic.twitter.com/OxH26vINoc