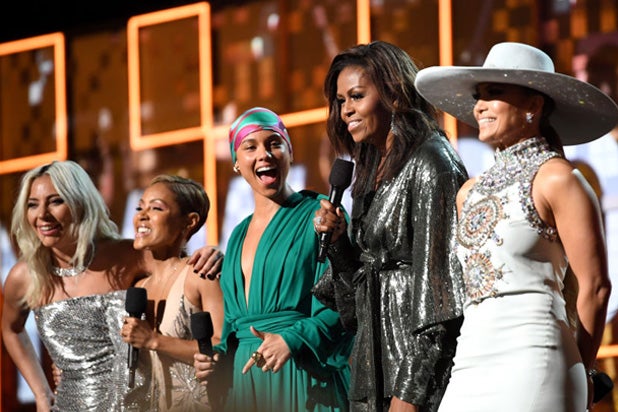 The 61st Grammy Awards was a night on which a hip-hop song won Song of the Year for the first time ever, a night when the boycotting Childish Gambino also won Record of the Year, and a night when Kacey Musgraves became the latest artist to beat Kendrick Lamar for Album of the Year.

But above all, perhaps, it was a night when women stepped up on stage — as a Grammy host, Grammy performers and Grammy winners.

It’s not a coincidence that this happened one year after Recording Academy President Neil Portnow caused a post-Grammys stink by suggesting that women needed to “step up.” On this night, the Grammys paid more than lip service to the idea of female empowerment — or, at least, the idea of rewarding and spotlighting female artists.

And the voters leaned toward women, not just with Musgraves winning the final award of the night, but also with the winning albums in the country, rap, R&B and pop vocal fields coming from Musgraves, Cardi B, H.E.R. and Ariana Grande, respectively.

The keynote performance of the night, it seemed, was a whispered interlude by St. Vincent and Dua Lipa between their performances of “Masseduction” and “One Kiss,” when they quietly intoned a refrain borrowed from Aretha Franklin: “R-E-S-P-E-C-T, find out what it means to me.”

And when Dua Lipa won Best New Artist a few minutes later, the pointed nature of her comment was unmistakable: “I guess we stepped up.”

Also Read: Ariana Grande Tweets Grammys Thank You, Dress She Would Have Worn If She Hadn't Opted Out (Photos)

Portnow, who is retiring later this year, took the stage himself after the ensuing commercial break, and made his own call for social change — which, in the recording industry, needs to involve an enormous number of recording jobs behind the scenes, in which women are extraordinarily scarce.

(One small step: Beck’s album “Colors” won in the Best Engineered Album, Non-Classical category — and for the first time ever, a female mastering engineer, Emily Lazar, shared in the award.)

But while gender occupied center stage at this year’s Grammys, the same old story played out when it came to Kendrick Lamar.

Lamar, along with Drake and Childish Gambino, had declined to perform at this year’s Grammys, no doubt tired of years of winning in the rap categories and then losing in the prestige categories of Record of the Year, Song of the Year and Album of the Year.

So he stayed home on Sunday, even though the “Black Panther” soundtrack he’d overseen and masterminded was considered one of the front runners in the album category.

And sure enough, “Black Panther” lost to Musgraves’ “Golden Hour,” just as Lamar’s landmark albums “To Pimp a Butterfly” and “DAMN.” had lost to Taylor Swift and Bruno Mars, respectively. (And back in 2013, his “Good Kid, M.A.A.D. City” had lost to Daft Punk, although that Lamar album was never considered a favorite in the category.)

The difference this year is that while Lamar was shut out in the Grammys’ general-field categories, hip-hop was not. Childish Gambino’s “This Is America” won Song of the Year, the first time a hip-hop song had ever captured that award, and added Record of the Year as well. Like Lamar, Gambino (the stage name of actor-director Donald Glover) opted neither to perform nor to attend, so he wasn’t on hand to accept those awards.

So even on a night when his musical genre made some significant inroads on the Grammys, Lamar still couldn’t catch a break. Good luck getting the guy to show up and perform on the Grammys’ big show next time he’s nominated, Recording Academy.

Also Read: From Katy Perry to Cardi B, the Grammys Most Outlandish Looks, Ranked (Photos)

Then again, the Academy might have nobody to blame but themselves, because the “Black Panther” loss could also have been a victim of the Grammys’ expansion of the top categories from five to eight nominees.

When the Motion Picture Academy expanded its Best Picture category, it also changed the way the vote was counted to prevent a film from winning with too small a percentage of the total vote. But the Grammys did not — and with eight nominees in Album, of the Year, six of which fall vaguely in the R&B/hip-hop field, they may have set up a situation in which the two albums that don’t fall into that genre, Musgraves’ and Brandi Carlilie’s, had an advantage because they were only splitting the vote two ways, not six ways.

As Neil Portnow knows, his last show as head of the Recording Academy was about some people stepping up and others stepping out of the way.