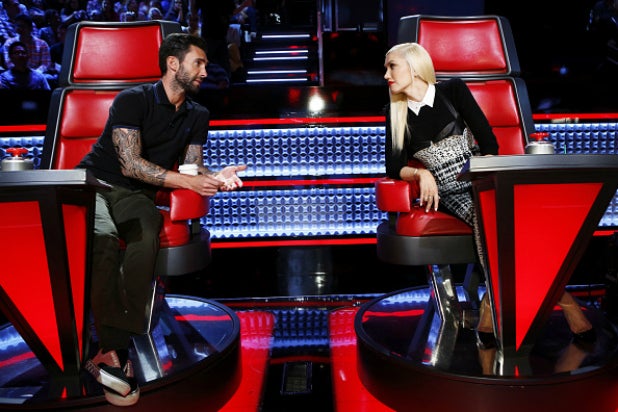 Looks like CBS just stole some potential NBC thunder: The pairings for the 57th Annual Grammy Awards musical collaborations — A.K.A. the “Grammy Moments — will be headlined by a first-ever collaboration between “The Voice” judges Adam Levine and Gwen Stefani.

Also teaming up next month are Hozier and Annie Lennox, Jessie J and Tom Jones, and of course Tony Bennett and Lady Gaga, who have become quite the on-stage duo as of late.

“Throughout the years, the Grammy Awards has paired musical icons with new, upcoming artists to give fans remarkable performances that can only be seen on our stage,” said Recording Academy President/CEO Neil Portnow. “This year is no different, and once again promises to bring together unique musical worlds in innovative ways that blend genres and create new artistic boundaries.”

“Musical collaborations have become a Grammy staple, and the best part is that artists now suggest many of these duets themselves,” added Executive Producer Ken Ehrlich of AEG Ehrlich Ventures. “I’m very excited about this year’s special segments, and believe they’ll be talked about for a long time to come.”

The 57th Annual Grammy Awards are produced by AEG Ehrlich Ventures for The Recording Academy. Ehrlich is executive producer, Louis J. Horvitz is director and David Wild and Ehrlich are the writers. LL Cool J is a producer and the show’s host.

BEST: Madonna and Son David's matching suits
Watch out, Diane Keaton. You are no longer the best dressed pantsuit enthusiast in town, because Madonna went back to her "Express Yourself" roots and then went over-the-top by including a hat, a cane and a matching child by her side.
View In Gallery