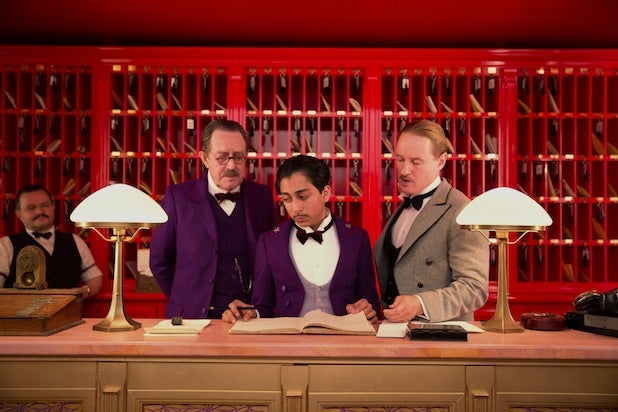 “The Grand Budapest Hotel,” “Into the Woods” and “Inherent Vice” are among the nominees for the 16th Annual Costume Designers Guild Awards, the CDG announced on Wednesday.

So is “Selma,” which ended a 0-for-5 drought and picked up its first guild nomination of the year.

The guild chooses nominees in three separate categories: Excellence in Contemporary Film, Excellence in Period Film and Excellence in Fantasy Film. In recent years the CDG has typically nominated three or four of the films that will go on to receive Oscar nominees for Best Costume Design – and in virtually every case, they’ve come from the CDG’s period category.

Nominees in that category were “The Grand Budapest Hotel,” “The Imitation Game,” “Inherent Vice,” “Selma” and “The Theory of Everything.”

“Guardians of the Galaxy,” “The Hobbit: The Battle of the Five Armies,” “The Hunger Games: Mockingjay Part 1,” “Into the Woods” and “Maleficent” were nominated in the fantasy category.

CDG winners in the period category go on to win the Oscar about half the time; only one winner from the fantasy category, “Alice in Wonderland,” has taken the Oscar, and no winners from the contemporary category.

In the television categories, nominees included “House of Cards,” “Scandal” and “Saturday Night Live” among contemporary TV series, “Boardwalk Empire,” “The Knick” and “Masters of Sex” for period/fantasy series, and “Houdini,” “The Normal Heart” and “Olive Kitteridge” for longform TV.

“Boyhood” director Richard Linklater will receive the Distinguished Collaborator Award, while the Honorary Career Achievement Award will go to Aggie Guerard Rodgers and the Edith Head Award for the Advancement of Costume Design will go to Dr. Deborah Nadoolman Landis.

The CDG Awards will take place on Feb. 17 at the Beverly Hilton Hotel.