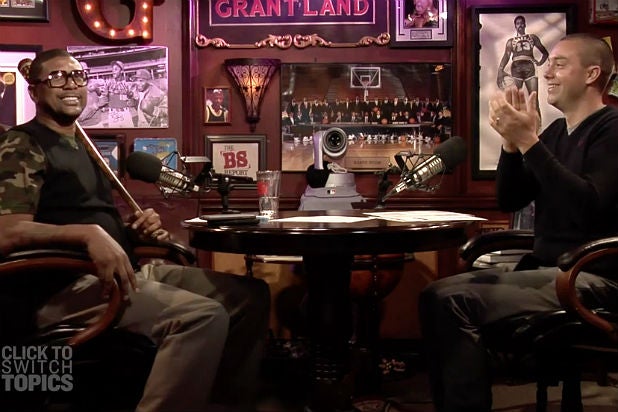 ESPN is giving fans even more Jalen Rose and David Jacoby as the Grantland collaborators are set to team up for a new primetime national radio show.

“Jalen & Jacoby” will launch Monday, Sept. 28. and feature the distinctive style of the former NBA star and the Grantland writer, podcaster and senior producer.

“We plan to look, feel and sound unlike any other radio show on the air right now,” Rose told TheWrap. “We want it to be as unprofessional and undisciplined as possible.

“The key is being able to talk about a lot of different things — sports, music, politics, current topics and doing polls like favorite TV theme songs. It is an extension of what we’re doing at Grantland,” Rose explained.

Rose and Jacoby first began working together in 2011 on a podcast for the sports/pop culture website launched by Bill Simmons, who acted as editor-in-chief until his high profile departure from ESPN last May.

“Our podcast was not in either of our contracts, it was a passion project. I give a lot of credit to Bill Simmons who trusted us with the opportunity and now we’re excited to give the people what they want five days a week,” Rose explained.

“What makes us unique is that I am a stickler for not forcing topics and just talking about what listeners want to hear as opposed to what the media is talking about. There are some really good radio shows out there and we want to compete with the best,” pledged Rose, a former member of the Michigan Wolverines’ “Fab Five” who played in the NBA from 1994 to 2007.

Jacoby continued, “Jalen and I have always been focused on our digital ‘on-demand’ audience and that won’t change. The only difference that someone who downloads our audio podcast or watches our YouTube videos will notice is that they have a lot more of ‘Jalen & Jacoby’ every week,” he told TheWrap. “The concept that terrestrial radio shows are only listened to as they are broadcast is outdated.

“I can promise we will have fun and I can promise that we will do everything in our power to entertain and educate our audience. I can’t promise that Jalen won’t sing. The guy really likes to sing,” Jacoby added.

In the three months since Simmons’ departure, Grantland has experienced its largest traffic growth with 7.2 million unique users in July, especially among the all-important millennial population with 57 percent of its audience aged 18-34, according to ESPN.

“Jalen and Jacoby” is set to broadcast each night on ESPN Radio between 7-9 p.m. ET, the podcast or YouTube versions will also be available the next morning.