The George Clooney-Sandra Bullock 3D space epic “Gravity” blasts off Friday, with a payload of glowing reviews and festival buzz that has fueled Oscar hopes and big box-office expectations.

The Alfonso Cuaron directed sci-fi saga could hit $40 million in its first three days and will easily win the weekend over the Justin Timberlake-Ben Affleck gambling thriller “Runner Runner,” which should come in at around $10 million, analysts say. Warner Bros., which is distributing, is projecting a $35 million debut.

“I think ‘Gravity’ is going to blow people away,” said BoxOffice.com editor-in-chief Phil Contrino, “It has glowing reviews, the trailers and commercials are strong and buzz has been building steadily.”

He pointed to Facebook and Twitter, where “Gravity” has been surging over the past week. As of Tuesday it had been mentioned in 19,334 tweets, more than double the mentions that “Life of Pi” garnered at a similar point prior to its release.

Bullock teamed with Melissa McCarthy in this summer’s hit comedy “Heat,” but Clooney hasn’t been seen on the big screen since 2011’s “The Descendants.” Those two and Cuaron are drawing awards buzz, but the real star of the film may be the special effects. Several reviewers have compared it to visually groundbreaking films like “2001: A Space Odyssey,” “Star Wars” and “Avatar,” and nearly every notice has been positive. It has a glowing 98 percent fresh rating on Rotten Tomatoes.

Produced by David Heyman (“Harry Potter”) and Cuaron for $80 million, “Gravity” should have no trouble making its money back at the box office.

It will be in more than 3,450 theaters and the bulk of those will be 3D and 315 of which will be Imax, which will provide a premium boost. It will also be helped by its relatively tight 91-minute running time, which will allow for more screenings, and PG-13 rating.

“Gravity” is rolling out in more than 30 overseas markets this weekend as well.

It’s hard to imagine a teaming of Hollywood hunks Timberlake and Affleck, recently tapped as the next Batman, being overwhelmed at the box office, but that could happen to “Runner Runner.”

New Regency’s gambling thriller, which Fox is distributing, is a relatively small film, with a production budget of less than $30 million. 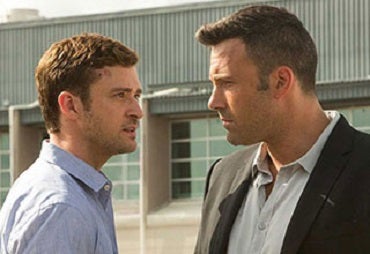 In the Brad Furman-directed “Runner Runner,” Timberlake plays a college student who is cheated out of his tuition money playing online poker and confronts the offshore entrepreneur (Affleck) behind it. He becomes the kingpin’s right-hand man and winds up in a tight spot when the FBI wants to use him to bring the operation down.

Leonardo DiCaprio is a producer, and Gemma Arterton and Anthony Mackie co-star.

Not surprising women are the target demographic for “Runner Runner,” which could well fare better abroad than here. It’s already taken in more than $12 million from overseas. Fox will have the R-rated thriller on more than 3,000 screens in the U.S.

Picturehouse is expanding its 3D concert film “Metallica Through the Never” into 650 theaters this weekend, after it took in $1.7 million on 318 Imax screens in its debut last weekend.