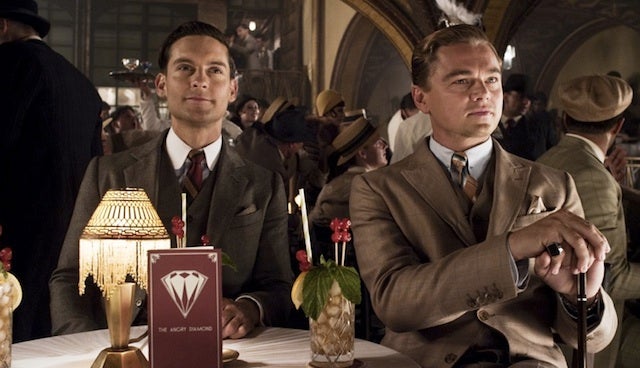 Baz Luhrman's  swooping, swooning, hyper-kinetic adaptation of F. Scott Fitzgerald's "The Great Gatsby" has some critics reaching for the Dramamine.

The film is a $127 million bet by Warner Bros. that audiences really, really loved high school English class — or at least have a powerful hankering to see Leonardo DiCaprio set tongues wagging throughout West Egg. It opens officially on Friday.

Many top critics have yet to weigh in, so it's possible that Luhrmann's reinterpretation of the classic novel will gain accolades as more and more reviewers offer their assessments. So far, however, the response has been mixed.

In TheWrap, Alonso Duralde savaged the film as little more than a bloated advertisement for Brooks Brothers' inevitable collection of "Gatsby"-inspired clothes. Worse yet, he said that the loud, anachronistic music and garish party scenes can't rescue the film from being dull.

A lighter touch might have served the material better, he implies, as well as a tighter focus on performances.

"Humanity is, in fact, in short supply here, with most of the supporting characters reduced
to grotesque mugging and posturing," Duralde writes. "Luhrmann treats the people of color here like exotic furniture, shooting his African-Americans as though he were planning to turn them into Mammy cookie jars."

The New Yorker's David Denby was also left uninspired by Luhrmann's Flapper-infused phantasmagoria, but he argued that Fitzgerald's slender meditation on class may be particularly resistant to big-screen treatment.

"The book is too intricate, too subtle, too tender for the movies," Denby writes. "Fitzgerald's illusions were not very different from Gatsby's, but his illusionless book resists destruction even from the most aggressive and powerful despoilers."

Drew McWeeny of Hitfix gave the film a resounding "meh." He said the technical aspects of the film — its costumes and use of 3D — are laudable, but gripes that the actors and director never find the beating heart beneath all the glitter.

"I have spoken with three people now who have struggled to articulate their feelings about this film before landing on 'I didn't hate it,' and that seems damning to me," McWeeny writes. "I don't hate it, either, but I can't really recommend anything about it. It is professionally made and entirely limp, a gorgeous piece of craft hung on a nothing of a script, a prime case of how you can throw all the best intentions in the world at a project and none of it matters if if just doesn't click, chemistry-wise."

Variety's Scott Foundas faults the director for favoring style over the substance, likening the over-stuffed approach to a Macy’s Thanksgiving Day Parade staged by Liberace.

"Together with cinematographer Simon Duggan, [Luhrmann] unleashes every manipulation he can think of – sepia flashbacks, smash zooms, split screens, superimpositions, period newsreel footage, new footage degraded to resemble period newsreel footage – all of it coming at you in three steroscopic dimensions," Foundas writes. "Only occasionally does the style seem like an actual response to the text rather than a visual circus operating independently of it."

Yet many of the opulent elements that those critics found tedious proved galvanizing to The Hollywood Reporter's Todd McCarthy. The veteran appraiser lauded the production design and performance of DiCaprio even as he acknowledged the movie will divide critics with its hyperactive approach.

"But no matter how frenzied and elaborate and sometimes distracting his technique may be, Luhrmann's personal connection and commitment to the material remains palpable, which makes for a film that, most of the time, feels vibrantly alive while remaining quite faithful to the spirit, if not the letter or the tone, of its source," McCarthy writes.