HBO Max’s newly streaming “The Great Pottery Throw Down” is sure to draw the attention of fans of “The Great British Bake Off,” but there’s one thing the ceramics-based competition show has that its sister series does not.

“It’s that measurability, I can tell if it works or not. I don’t need to be a master potter to understand this toilet can’t flush properly,” executive producer Sarah Thomson-Woolley says, hinting of a ceramic project in an upcoming episode. “I think it’s that actually, that’s become a really lovely part of the series. You can play along as a judge.”

The series, three seasons of which have aired in the U.K. thus far and are now available to stream on HBO Max, bears the same format as “Bake Off” (known as “The Great British Baking Show” in the U.S. due to trademark conflicts), only with pots and vases — and, yes, toilets — instead of scones and cakes.

“With ‘Bake Off,’ I can’t taste the cake. I can see the cake, it’s lovely, but when you actually cut into it, the judge is telling me that it’s not very nice or it’s too dry,” Thomson-Wooley said. “Whereas with pottery, you can immediately have that judgment yourself. I like it ascetically, but also it practically works.”

That easily accessible visual component has also helped the show grow beyond the template that “Bake Off” set, Thomson-Woolley said. With less time needed to be dedicated to the evaluation of the potters’ pieces, the show is freed up to deliver more personal stories.

“Certainly with the third series, you feel like you meet them and get to care about them a lot more. We moved more into the personality of the potters and the pots,” she said. “We felt like will people understand the techniques? How much do you need to know to understand them? I think by the time you get to the way it’s evolved, I can play along if you’re making a cafetière and all I need to know that the plunger fits or not.”

Read the rest of TheWrap’s interview with Thomson-Woolley below. 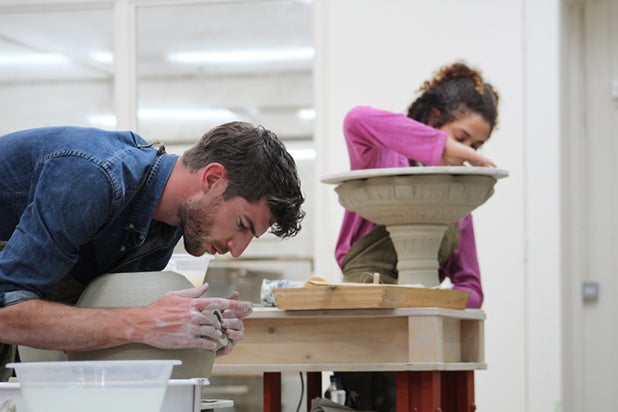 For an American viewer who has seen and enjoyed “The Great British Bake Off,” what would your pitch be to get that kind of viewer to watch “The Great Pottery Throw Down”?

Well, it’s kind of “Bake Off” with explosions, I guess. And a lot more jeopardy and drama in the making of pots. The starting material is basically a lump of mud, a lump of clay that transforms into all these wonderful, magical pieces and throw into that the alchemy of glazes and things, and the colors that you get out of ceramics or get in ceramic. And then with the precariousness of firing in the temperatures of the thousand degrees.

This format has obviously been very successful in a way that a lot of similar shows haven’t been. Do you have a sense of why it works so well?

I think it’s the people that are involved, it’s the potters, the characters that come together and in this love of pottery. We have characters from all over the U.K., who are from nurses to models, to accountants who have this passion for pottery and it comes through in what they make. Bringing out that character in the stories that they tell, behind what’s being their inspiration for their makes allows us to get to know them and care about them. It could just be a teapot they’re making, but certainly, it’s a teapot in the style of something they remember from the gran’s house, or it’s got that personal connection. And they made with their hands. So more than any other show they’re putting themselves on the line. Quite often they’ll say, usually when they make pieces or are in their own little studio, they can have failures and they can have successes in private, but suddenly they’re in this room with other potters and that privacy is opened up. It’s nice to see that side of people.

Can you speak to casting the show and is there something specific that you’re looking for that makes the show work?

I think I’m always looking for a combination of people from different backgrounds and different reasons as to why they came to pottery. But I’m also looking for what on judging day looking across the 12. Looking at 12 very different characters, but I also want them to deliver 12 different styles of approach to their pottery so the pots are as unique as the people. Some people like to work with a minimal style; some people like to work with brighter colors. You want that nice mix of creative minds coming to life in the pots that they make.

From the standpoint of a viewer, it seems like there really has been a lot of growth in the talent level across the three seasons. Is that what you’ve been seeing?

Well, I think pottery’s always been a craft that people have loved to do, but it’s not something that’s like baking your family where can pass that down or you can pick up a recipe book and start baking. With pottery, you have to go and find a course or something. I think through the show and people coming to the show, people are seeing it and thinking they want to have a go. Each year that we do it, it feels like we created an appetite for pottery that is this byproduct of the show. There are more courses now in the UK to do pottery, night classes, waiting lists for people to do it.

So I think through the show and seeing people who perhaps hadn’t thrown particularly large items or made these things in the different challenges has inspired people to go and try different techniques of pottery. So maybe they’ve had a lifetime of making mugs and suddenly they’re making it a water pitcher. I don’t know, it feels like the show has helped the pottery — the hobbyist level of pottery anyway — grow. 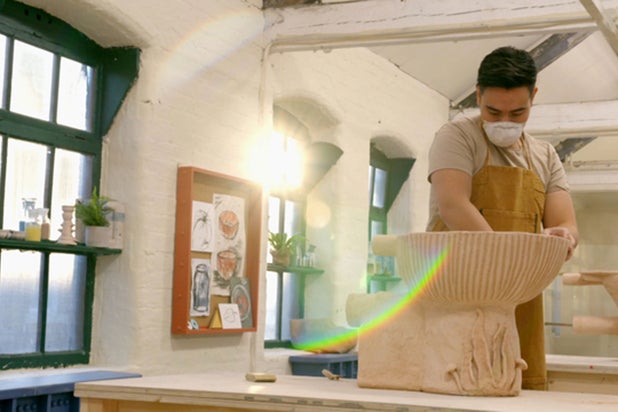 We’ve seen “Bake-Off” have enormous success in the U.S., but attempts to adapt it haven’t really been able to capture the same audience. In your view, is there something uniquely British about this format or its sensibility that really affects the way the show is received?

I think [“The Great Pottery Thrown Down” has] a fairly universal appeal because we all have our coffee out of a mug. We all have our dinner on a plate. We all go to a toilet that’s made of ceramics. It’s all ceramic, it’s all clay. And I think that gives it that universal appeal … So, I think it’s more relatable. I feel because we’re in Stoke, which is the part of the U.K. that’s famous for huge pottery, ceramic names like Wedgwood and things like that, but that gives it a Britishness. But in terms of what we’re making, the world over can see those ceramics in their own homes and everyday life.

In the days since the show has been out on HBO Max, have you seen the response from an American audience differ at all from what it was when it originally aired in the UK?

It’s gotten some really great reviews, which is lovely to hear. We have a lot of people — even for the UK show — we sometimes have people from the States wanting to apply. And we have a worldwide audience that somehow gets hold of the show, even when it’s going out in the U.K. They hear about it and they want to see it because they’re into pots, so I know there’s an appetite for it worldwide. I just hope that the American audiences engage with it as our British audiences do. I mean, as I say, I think whether you make a cup in the UK or you make it in the States, people are going to enjoy seeing how that’s made and the creativity that goes into it.

Do you have a favorite piece or is there one that really stands out in your mind as a personal favorite?

That’s a hard one actually. I really loved in seasons three, when we did the chest set. That’s 32 pieces of metal, queens and pools. I just loved the creativity that went into it and what they managed to do in clay. But I also loved the first time we did the toilet. I was like, such a ridiculous task but actually how do toilets work? We don’t have to think about that really. Just thinking about that engineering side of it, but also know how to build these things, huge pieces of ceramic hand build them. It’s brilliant. And obviously that circle toilets, that one of the potters made was probably one of my favorite pieces actually.

Are there any plans for how to begin production on a fourth season, given the pandemic?

Yeah, definitely. There is a huge appetite for the series to come back and “Bake-Off” is just airing at the moment they filmed this year. So, yes, we’re looking to create another series within regulations about social distancing.

Do you have a sense of when that might start going into production?

Not as yet. I can’t put a date on that for you just yet. 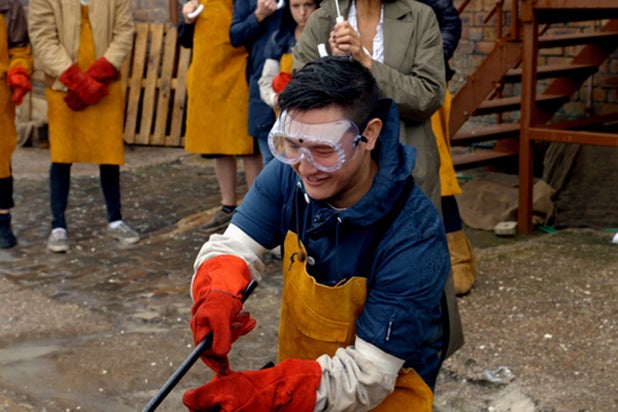 “The Great Pottery Throw Down” Seasons 1-3 are available to stream on HBO Max.

Not every show can be ”Survivor“