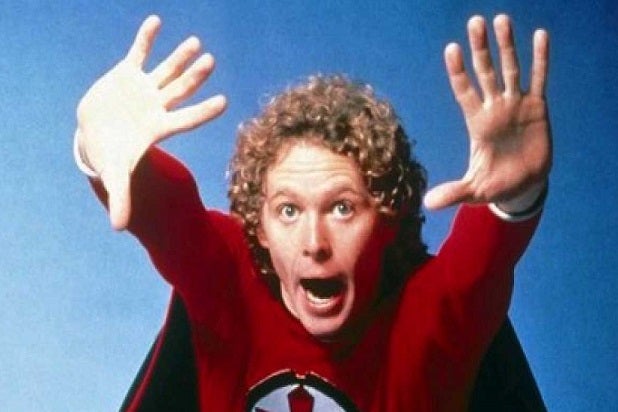 Believe it or not “The Greatest American Hero” could be coming back to the air.

Fox is developing a reboot of the Stephen J. Cannell series which ran from 1981-83 and starred William Katt as Raph Hinkley, a teacher who receives a suit that gives him superhuman powers. Hinkley then embarks on a trial-and-error career of do-gooding.

The project, which comes from “21 Jump Street” directors Phil Lord and Chris Miller, has received a put pilot commitment, meaning Fox is subject to monetary penalties if the pilot doesn’t air.

The one-hour action comedy project will offer a new take on the classic series and will revolve around an inner-city teacher named Isaac whose discovery of a superhero suit which also gives him superhuman abilities. Unfortunately for Isaac, he hates wearing the suit and has to learn how to use its powers by trial and error because he quickly misplaces the suit’s instructions. He also has to deal with a government handler who has very different objectives than him and struggles as to whether he should use his newfound gifts to help others or just himself.

Lord and Miller are executive producing via their shingle Lord Miller, which has an exclusive overall deal with 20th Century Fox Television to develop, write and direct comedy projects. The pair’s “22 Jump Street” collaborator Rodney Rothman is writing the pilot, and is also executive producing.

“The Greatest American Hero” marks the second sale this season for Lord Miller, which also sold an untitled comedy project from writer Dan Sterling (“The Interview”) to CBS. Lord and Miller also have the upcoming straight-to-series comedy “Last Man on Earth,” starring Will Forte, at Fox.

Deadline first reported the news of the “The Greatest American Hero” reboot.