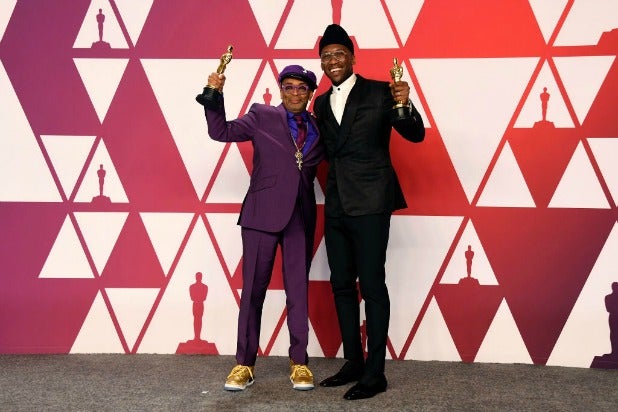 Spike Lee’s beloved New York Knicks won Sunday night, but his “BlackKklansman” was among the films that lost Best Picture to “Green Book” at the Oscars. And after the show ended, the director likened the decision to a referee making a bad call.

Asked about his reaction to the “Green Book” win, Lee, holding champagne, declared, “let me take another sip.” After a sip, he added tactfully, “next question.” But after a few moments, he added: “I thought it was courtside at the Garden and the ref made a bad call.” (Watch his reaction below.)

Asked about "Green Book," Spike Lee decided it was time for more champagne.

At the Oscars in 1990, “Driving Miss Daisy” won best Picture. The film is about a white Southern lady played by Jessica Tandy and her relationship with her black chauffeur, played by Morgan Freeman. Lee’s acclaimed “Do the Right Thing” wasn’t nominated in the main category.

“Every time somebody’s driving somebody, I lose,” Lee joked. “But they changed the seating arrangement. But in ’89 I didn’t get nominated. This one, we did.”

Associated Press reporter Andrew Dalton tweeted Sunday night that Lee was “visibly angry” when “Green Book” won Best Picture, “waving his arms in disgust and appearing to try to storm out of the Dolby Theatre before he was stopped at the doors.” Dalton said he “returned to his seat when the speeches were over.”

Spike Lee was visibly angry when "Green Book" was announced as the winner of best picture at the Oscars, waving his arms in disgust and appearing to try to storm out of the Dolby Theatre before he was stopped at the doors. He returned to his seat when the speeches were over.

Lee was also nominated for Best Director on Sunday, which went to Alfonso Cuaron for “Roma.”

Before he won, his friend and collaborator Samuel L. Jackson informed him, from the stage, of the Knicks win.