Early on in “Greenberg,” the titular character, Roger Greenberg (Ben Stiller), jumps into a swimming pool and is barely able to stay afloat with a flailing dog paddle. 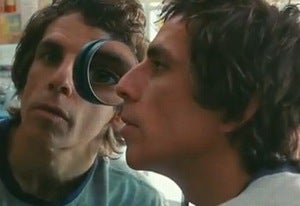 Greenberg is a character not so much in crisis as in stasis. At 40, he is unmarried, unemployed, stuck in the past and just now recovering from a nervous breakdown.
He’s no hero, unless you consider it heroic to gain finally the most tentative of fingerholds on adult life and emotional maturity. What he is, is a protagonist — a troubled, multi-dimensional character going through an extended bad patch in the drama that is life.
It makes you realize how seldom Hollywood makes movies about guys like Greenberg anymore. Too much of a downer. All talk, not enough action.
Ever since “Rocky” scored big in 1976, popular movies have become focused on straight-ahead, uncomplicated guys who save the day without discussing endlessly why they’re doing it. That wasn’t always the case.
Hollywood legends like Humphrey Bogart and Clark Gable played men with complicated pasts and iffy futures. Bogart’s tough guys in both "Casablanca" and "To Have and Have Not" are the most reluctant of heroes, and he
regularly played louses throughout his career, including his supremely unhinged Commander Queeg in "The Caine Mutiny."
Ditto for Gable who, in his most famous role as Rhett Butler in "Gone With the Wind," arguably rapes the
heroine and walks out on her at the end, uttering the most famous exit line in American cinema.

In the late ‘60s and ‘70s, anti-heroes reigned. Think of the warped and troubled souls played by Warren Beatty in “Bonnie & Clyde,” Jack Nicholson in “Five Easy Pieces” and Robert De Niro in “Taxi Driver.”

Even in that first “Rocky,” Balboa was far from simple in that he was simple-minded. But presto-chango, by the time the second and succeeding “Rocky” slugfests rolled around, that dimness was a dim memory, despite many more blows to the head during multiple epic ring battles.
Hollywood’s hero worship became almost codified after Ronald Reagan was elected President in 1980. It was morning in America and a sunny one at that. A product of Hollywood’s Golden Age, this movie star turned politician divided the world neatly into good guys and bad guys and winners and losers, just like in the movies he had made.
Studio fare followed his lead and has been pretty much sticking to the path ever since.
Consider the career of Harrison Ford, an actor who isn’t always given credit for being as good as he is. In 1977, his grouchy Han Solo was far from a sweetheart in "Star Wars," the seminal blockbuster. Ford even tried playing
a father who went nutso, bringing harm to his family in the process, in 1986’s "The Mosquito Coast."
But when that movie failed at the box office, he permanently got with the program. In pretty much every movie since (excepting the 2000 gothic thriller, "What Lies Beneath"), he has been all things admirable, kicking butts and saving the world from terrorists and other villains. (Even as the president of the United States hanging out of Air Force One as Gary Olman tumbles to his death.)
All of which is by way of saying that “Greenberg,” from director-writer Noah Baumbach (“The Squid and the Whale” and “Margot at the Wedding”), seems almost like a throwback to the sort of movies John Cassavates and Hal Ashby were making in the anti-hero era. Greenberg is a semi-schmuck, a guy no one in the audience either wants to be or identify with. Back in the day, Dustin Hoffman would have been perfect for the lead.
He arrives in L.A. from New York City to housesit for five weeks for his much more successful, vacationing brother. A one-time musician turned carpenter, he is supposed to be building a doghouse for his brother’s dog while bunking in the upscale, comfortable Hollywood Hills home.
Florence Marr (Greta Gerwig), the 25-year old would-be singer who works as the brother and his family’s personal assistant, drops by to look after the dog. When she asks Greenberg if he needs groceries, his list contains two items: whisky and ice cream.
Slowly and with more stops than starts, these two form a relationship. Not so much a full-fledged romance, really, as Greenberg finally comes to understand that other people matter and sometimes you have to be nice to them. Life, he finally begins to grasp, in the doing and the moving ahead.
The first half of the film is engaging and funny. If the second half lags, it’s because you grow impatient with these two. Greenberg seems ever more the jerk and Marr is too passive. And how come no one ever worries about money or jobs in a movie like this?
But I’m guessing that “Greenberg” will wear well. One is still thinking about it days after seeing it. Greenberg, maddening though he may be, stays with you.
And therein lies difference. Heroes, the ones without flaws or complexities, don’t stay. They save the day and move on to the sequel.
x
Looks like you're enjoying reading