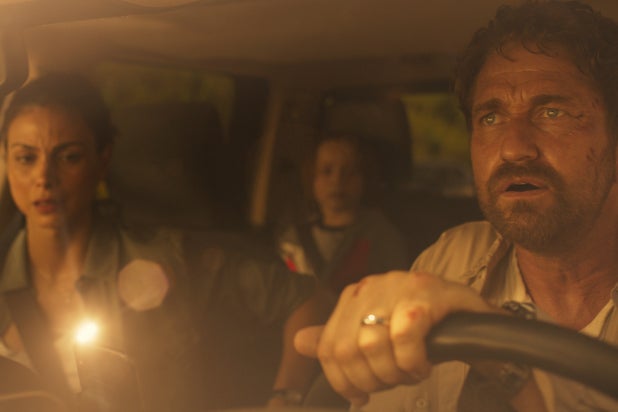 Gerard Butler’s screen career of late has been all about saving presidents and warding off geostorms, but “Greenland” throws an extinction event in the actor’s path that’s so apocalyptic, the best he can do is try to get himself and his family to safety.

The fact that a rain of comets has no jaw for Butler to punch makes it one of his more engaging vehicles of late, particularly since director Ric Roman Waugh feels more at home making a disaster epic than he did with his previous collaboration with the actor, the ludicrous “Angel Has Fallen.” It’s a specific skill set to find individual stakes against a backdrop of mass destruction, but the filmmaker (working from a script by Chris Sparling, “Buried”) finds moments of humanity as the doomsday clock ticks down.

Butler stars as architect and structural engineer John Garrity. (And for once, he gets to play a character who’s actually Scottish, thus sparing his co-stars the need to pretend that they’re not hearing his substantial burr.) Everyone’s excited about the approach of Clarke, a comet that has suddenly appeared from another galaxy, as it whips by Earth, but the celestial body turns out to be deadly; the first fragments that hit the planet wipe out central Florida and send shock waves through the suburban Atlanta neighborhood where John’s estranged wife, Allison (Morena Baccarin), lives with their son, Nathan (Roger Dale Floyd, “Doctor Sleep”).

As their friends begin to panic, John and Allison get notifications on their phones and TV screens that they and Nathan have been selected by the Department of Homeland Security to be taken to an undisclosed secure site, and that they must report to an Air Force base for relocation. Soon after arriving, the family is separated; John has to go back to the car to get Nathan’s insulin, and when officials discover in his absence that Nathan has a medical issue, the boy and his mother are barred access to the planes.

With more and more fragments slamming into the Earth, the Garritys have to reconnect with each other (both literally and emotionally) and figure out an alternate route to Greenland, where the U.S. government’s underground bunkers can shield a select few while the comets lay waste to 75% of all plant and animal life on the planet. Their travels will involve looting, hand-to-hand combat (with a claw hammer thrown in for good measure), kidnapping and a few more shock waves.

To his credit, director Waugh and his VFX crew make each of those shock waves really pop, and “Greenland” often gets the details right, whether it’s the crowds of panicking citizens trying desperately to get into that Air Force base, the cars that do or don’t stop to help people in need, and the way that news anchors pivot from the jovially curious to the utterly dire over the course of Clarke’s path of destruction.

As disaster movies go, this is less in the Irwin Allen school and more along the lines of 1962’s “Panic in Year Zero!” in which Ray Milland and his family try to survive in the countryside after Los Angeles is hit by nukes; it’s a story less about radiation and more about the best and worst sides of humanity that the family encounters in their journeys. Similarly, John, Allison, and Nathan find respite and assistance in some quarters and naked self-interest in others.

Butler’s less-than-dynamic screen presence is put to good use here; as opposed to the “Has Fallen” movies, where he’s the world’s greatest Secret Service agent, here he’s just a dad trying to look out for his family under extreme circumstances. (A dad who can throw a punch, granted, but a dad all the same.) He and Baccarin play the tension of their relationship well, and it certainly helps that they encounter a talented cross-section of character actors, including Hope Davis, David Denman, Andrew Bachelor and, as Allison’s father, the indefatigable Scott Glenn.

“Greenland” isn’t about anything in particular, and it fizzles out as we reach the climax, since it paints itself into a corner of two options — they make it, or they don’t make it — without making the audience care all that much either way. But for most of its running time, it has a palpable B-movie energy that gives a little oomph to the umpteenth cinematic portrayal of humanity’s end.