After a month on the air, Fox News’ new late-night program, “Gutfeld!” is doing what it set out to do: It’s killing in late-night ratings.

In a comparison of live and same-day total viewers for all the late-night shows on cable and broadcast, in fact, Greg Gutfeld’s new nightly show was beaten only by Stephen Colbert’s “Late Show” on CBS and “Jimmy Kimmel Live!” on ABC over the past month, according to Nielsen Media Research ratings data. (Note that the programs all start at different times and in many – but not all – cases, they’re not competing directly.) 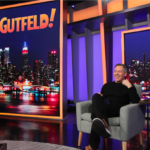 Next came Gutfeld’s 11 p.m. ET offering, pulling in 1.515 million total average viewers. Of those, 305,000 were between 25 and 54 and 181,000 were between 18 and 49. These numbers are notable because fewer American households have cable than the broadcast networks.

Though Gutfeld’s new show was marketed and promoted as a conservative response to the left-leaning programming on broadcast networks, it is still a cable news show and competes more directly with the 11 p.m. ET offerings on CNN and MSNBC.

Fallon beat Bream in the first three months of 2021, only to be leapfrogged by Gutfeld when the new show came on the Fox News airwaves.

On a Tuesday earnings call, Fox Corporation executive chairman and CEO Lachlan Murdoch praised Gutfeld’s new show for its first month on the air: “In April, the Fox News Channel debuted the late-night program ‘Gutfeld, exclamation mark.’ The exclamation mark is apropos as, since its launch, the show has averaged over 1.5 million viewers per night, representing a 25 percent increase in the 11 p.m.-midnight ET time period versus the month prior. To put this into context, ‘Gutfeld!’ is drawing an audience that is roughly the same size as ‘Jimmy Kimmel Live!’ and larger than ‘The Tonight Show’ despite FOX News reaching fewer households than the broadcast networks.”