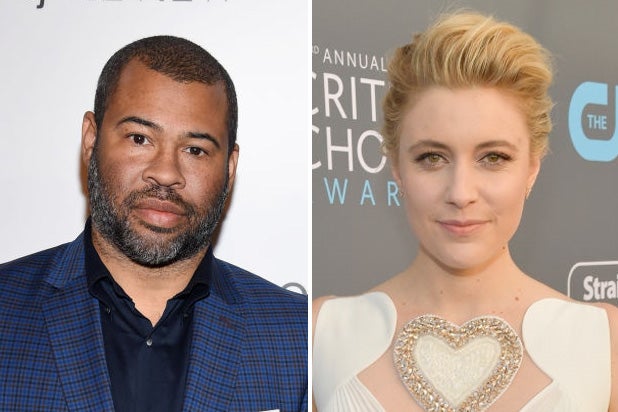 Among the best-reviewed films of 2017 were “Lady Bird” and “Get Out,” and both are first-time efforts directed by actors. Though shut out of the Golden Globes directing category, Greta Gerwig and Jordan Peele were both recognized by the more prestigious Directors Guild of America. Now, all eyes are on their chances for the upcoming Oscar nominations.

“Of all the disciplines to cross over, actors have probably had the best track record,” producer and former Universal chief Tom Pollock said.

And history tells us that performers-turned-directors do exceedingly well at awards time, most particularly with their early works. Robert Redford and Kevin Costner earned Oscars for their first stabs at taking the helm, “Ordinary People” and “Dances With Wolves.”

Some point out that the largest bloc of the academy is comprised of actors, and they may like celebrating their own. Or, more selfishly, paving the way for others to do the same. Whatever the motivations, directing Oscars have also been showered on Clint Eastwood, who has won twice, (his next, “The 15:17 to Paris” arrives in February) Mel Gibson for “Braveheart,” Woody Allen for “Annie Hall,” and Warren Beatty for “Reds.”

Though their most recent films have not fared well, Rob Reiner and Ron Howard became better directors than they were actors. The same could be said of Jon Favreau (working on the non-animated version of “The Lion King”), Peter Berg and Tom McCarthy. Many argue that Ben Affleck has also turned into a more impactful director than actor.

Either out of creative restlessness, or control freaking, many other actors have also taken a turn behind the camera, including Johnny Depp, Jack Nicholson, Sean Penn, Al Pacino, Tom Hanks, Ben Stiller and Denzel Washington. This is not entirely new, of course. Charlie Chaplin was a major auteur-actor and his movies certainly hold up. Of course, he didn’t have to worry about much dialogue. Orson Welles, who worried a lot about his dialogue, had an ego as big as his figure, and managed to make some classics before flaming out.

Actors seemingly like being directed by those who have at some point toiled in their profession. Many esteemed directors, such as Elia Kazan and Sydney Pollack, started as stage actors. In the ’60s, John Cassavetes turned to directing, and created a unique form of what might be considered high-end home movies starring his Oscar-nominated wife, Gena Rowlands.

Cassavetes, like Chaplin and Welles, often appeared on screen as well, a challenging feat. We were once at a gathering where Warren Beatty was probing Paul Newman on his experience handling both jobs. Newman, who was a pinch-hit director on “Sometimes a Great Notion,” said he would not recommend simultaneously starring in a film while directing.

He told Beatty, who was already a hugely successful producer, that if he was going to attempt to direct himself, “get a partner the first time.” Beatty’s next film was “Heaven Can Wait” and sure enough, it was co-directed by Buck Henry. Likewise, dancer-choreographer-actor Gene Kelly started his transition by co-directing “On the Town.”

One can imagine studios hesitant to greenlight a film helmed by, but not starring, a box office name. Which may explain why Bradley Cooper directs as well as stars (with Lady Gaga) in the upcoming remake of “A Star Is Born.” And let’s face it, the rapacious entertainment media will pay more attention to a film when the director just happens to also be a popular celebrity.

The number of films directed by women pales compared to men, so it has been even more daunting for actresses to make the leap. Which is why Greta Gerwig’s first outing is such a triumph. Along with Sarah Polley and other actresses transitioning to directing, Gerwig chose not to appear on camera in her “Lady Bird.” Angelina Jolie has done a better job as a director when she stays off camera. (“By the Sea,” anyone?)

Among women, Penny Marshall, Jodie Foster and Barbra Streisand have probably made the actor-to-director shift most smoothly. Streisand was nominated for a Golden Globe for Best Actress in “Yentl” but won for Best Director — the only woman to earn that prize at the Globes.

These days, women won’t be stopped. Brie Larson has directed “Unicorn Store,” which premiered at the 2017 Toronto Film Festival and is still awaiting distribution. Courteney Cox directed several episodes on television — a medium historically more accessible to actresses — before helming the 2014 indie “Just Before I Go.” “I’m never more creatively fulfilled than when I’m directing,” Cox said. “I love immersing myself in every aspect, including surrounding myself with incredibly talented people interested in supporting that vision.”

Now Gerwig carries the torch for female actor/directors in this tumultuous awards season. “Greta Gerwig made a first movie as a director that in no way looked like a first movie,” said Bob Berney, the head of marketing and distribution at Amazon Studios. May “Lady Bird” be more than beginner’s luck.