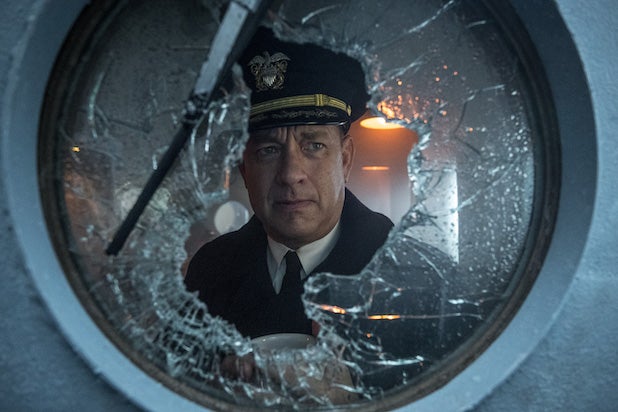 The high-seas World War II drama “Greyhound” clocks in with a svelte running time of 91 minutes, including end credits. But an extremely tightly wound and unrelenting 91 minutes it is. Starring and written by Tom Hanks, the plot is densely concentrated on about five days in February 1942, as Hanks’ Commander Krause is leading a convoy of destroyers through the so-called Black Pit.

That’s a stretch of the North Atlantic Ocean too far from land for the Air Force to provide assistance, leaving the 37 ships vulnerable to lethal German U-boats swarming below the surface.

In the film (streaming now on AppleTV+), every moment, day and night, in the Black Pit in fraught with peril. And instrumental to that gripping tension was the work of film editors Sidney Wolinsky (“The Shape of Water,” “The Sopranos”) and Mark Czyzewski (“Parkland,” “The Pacific”) who combined to spend nearly a year and a half piecing the movie together.

Foremost in the mind of both men was narrative coherence, despite the chaos of naval warfare.

Also Read: Is 'Greyhound' Based on a True Story?

“That was the real challenge,” Wolinsky told TheWrap. “I would be editing a scene with Tom Hanks saying, ‘Full right rudder, full left rudder,’ as he’s looking out a window to the left or right. So I had to figure out what was going on, first for myself and then for the audience.”

Wolinsky was grateful for the rudimentary “previz” (previsualization) that director Aaron Schneider and the production fabricated. “I had not heard that term until a couple years ago,” he said. “It’s a kind of primitive video game version of the film, which helps us to place the action.”

Czyzewski also talked about the importance of congruity. “In battle scenes, you can shake the camera and cut a lot faster,” he said. “But that’s just not the kind of thing that Tom Hanks is interested in. Neither is (director) Aaron (Schneider) or any of us in the crew. We focused on keeping the audience clear on what is going on and keeping the action as thrilling and rhythmic as we could.”

This was especially true in several complex sequences that Czyzewski referred to as “the game-of-telephone aspect.” When the ship’s sonar operator hears a ping, indicating a U-boat, the information is quickly relayed through a chain of officers before it reaches Hanks’ character.

“In the editing, we just needed to establish the order of that once,” he said. “The audience understands it very quickly. At first we thought we would need to throw in a lot of layman terms in those scenes, so that the audience would understand. But every time we (test screened) the film, they figured it out really fast. They wanted more naval jargon, more information. There was a hunger to know more and more about how these low-tech ships worked.”

Hanks’ screenplay, in its stark design, does not provide deep backstories for any characters, including his own. Flickers of their emotional states come through in carefully selected closeups.

“As an editor, I have to look at the characters’ faces and make sure I can tell what’s going on through them,” Wolinsky said. “A tight shot of a face can express what’s happening in the scene, sometimes more than the action can.”

The action, to be sure, is relentless. However, due to the intense amount of visual effects required, both Wolinsky (who started work on editing the film) and Czyzewski (who finished it) worked at times on raw footage. Scenes on the bridge and the bow of the ship were in fact filmed aboard the docked destroyer USS Kidd at a veterans museum in Baton Rouge, Louisiana.

“Initially, what I was editing was all wire frame and green screen,” Czyzewski said. “But Aaron is tech savvy, so he had built schematics we could refer to, showing where all the other ships were and what Krause’s perspective would be. It really became natural in a pretty quick period of time, considering that there’s actually not a real drop of water in the whole film.”

Speaking of water, Wolinsky brought up his previous credit, the Best Picture Oscar winner which notched him a nomination in the editing category. “‘The Shape of Water’ didn’t have all that much visual effects, compared to this,” he said. “‘Greyhound’ had more VFX than anything I’ve ever worked on, by far. It was kind of amusing to see footage of Tom Hanks on this museum ship in Baton Rouge, with a freeway overpass and a gangplank for tourists in the background. And it’s easy from our position as the editors to say, ‘Boy how the heck are they gonna fix all this?’ But wow, they did.”