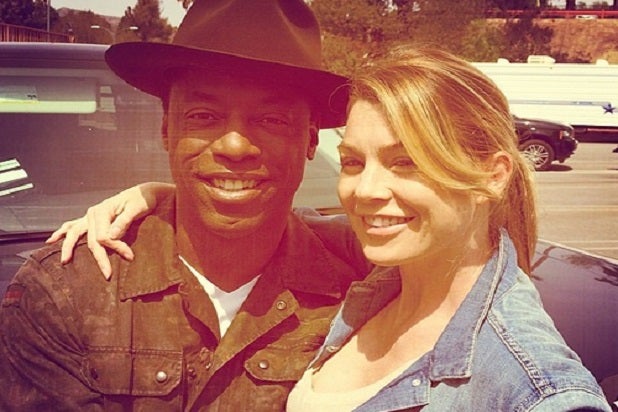 Isaiah Washington‘s return to “Grey’s Anatomy” might have seemed improbable when it was announced earlier this month, but now there’s photographic evidence proving that, indeed, this is a thing that’s really happening.

Washington’s “Anatomy” costar Ellen Pompeo coughed up the pictorial proof via Instagram this week, posting a photo of herself with Washington.

“Burke is back,” Pompeo wrote, a reference to Washington’s character, Dr. Preston Burke.

Washington, who currently stars on The CW series “The 100,” parted ways with the ABC drama in 2007, after making homophobic comments about co-star T.R. Knight.

However, in early March news broke that the actor would reprise his role as Burke in an episode to air in May, which will serve as departing cast member Sandra Oh‘s final episode on the series.

Series creator Shonda Rhimes said that Washington’s character is “vital” to wrapping up the story of Oh’s character, Cristina Yang.

“It’s important to me that Cristina’s journey unfolds exactly as it should,” Rhimes said. “Burke is vital to that journey — he gives her story that full-circle moment we need to properly say goodbye to our beloved Cristina Yang.”