Six-time Oscar nominee Jim Sheridan is back in the hunt this season with “Brothers”, a remake of Danish filmmaker Suzanne Bier’s “Broders.” The new movie stars Jake Gyllenhaal, Tobey Maguire and Natalie Portman in a drama about a soldier struggling to reintegrate with his family after returning from Afghanistan.

Sheridan came to the United States with a wife and two kids in tow when he was 31. He had made a name for himself in his native Ireland as a theater director, and hoped to repeat his success on Broadway. Living in a Harlem tenement, Sheridan scoured the city for work, but struggled to get by. It paid off, however, as that chapter in his life became the basis for his semi-autobiographical movie “In America,” for which he received an Oscar nomination for original screenplay. He’s been twice nominated as director, for “My Left Foot” and “In the Name of the Father”; both films also were nominated for Best Picture.

Jim Sheridan talks to TheWrap about the changing film industry, why “Brothers” has been on the shelf for a year, losing his brother at a young age and America’s state of denial about the war.

Q: They say the era of the movie star is over, and here you are with three of the hottest actors in their age group.

A: What these guys know from making so many movies is technically they’re very gifted. Sometimes on other movies you’re trying to stop people acting, or overacting. But with these guys you start at a kind of higher technical level. I think star personalities sometimes find it hard to be real people, so it’s trying to keep everything real, y’know.

Q: You lost a brother when you were 10 years old. How did that affect your outlook on life as a man and as an artist? 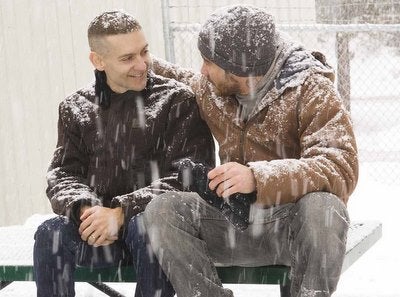 A: I think when you’re a kid, you think you’re responsible for the death because the only way of making sense is if it has something to do with you. There’s a level of guilt. And so when he kills the guy in the movie it’s almost like he’s killing a brother in arms he’s taken responsibility for in a way. It’s almost like God’s put him in a position that’s untenable and he chooses to live.

Q: Do you think war brings out the best or the worst in people, or both?

A: I think it is both. I think men go and they bond, so when somebody’s protecting your ass it’s like the deepest relationship you’ve ever had. It’s almost like having a parental relationship but as an adult. I think people come back with the idea that those relationships are deeper than any relationships they have. So it’s very hard to get past. So they come back and they’ve lost their family relationships, y’know, because the one they left behind was deeper and made sense and now the threat’s gone and maybe the person’s dead. It’s kind of like the world collapses.

Q: It seems audiences are staying away in droves from movies about the war on terror. Why do you think that is?

I think this movie is more about the home turf. It’s a story about the consequences in America of something that’s happened abroad, y’know. I don’t judge it as a war movie in that way.

Q: Are you confident the movie will perform in such a crowded field?

A: I think we’ve come out very late. We’re a dark horse and we’re coming out of left field for a lot of people. Because the movie was held for a year, people think there’s something wrong with it, but there isn’t. We just held it, y’know.

Q: Why did they hold it?

A: It was too busy last year and we got finished too late for December. They thought it might come out in the spring, but then they thought better of it.

Q: You’ve built your career on character-driven dramas. How hard it is to get this type of movie made in the current market?

A: I think it’s kind of a natural problem of the weekend movie and the logic of moviemaking now moving into the marketing division. I think that movies are just where real estate was, y’know. So there’s a lot of movies made that probably wouldn’t have been made with hedge fund money and too much money in the system. So they start cannibalizing each other and people probably got fed up seeing them, y’know. And I think what comes around goes around. I mean, “Precious” is a dark, deep movie. I went to see it last night and the cinema was full at 7 o’clock on a Saturday. You can’t say that’s not a strong character-driven movie.

Q: It’s also not a movie the studios made.

A: The logic of that is eventually they kind of cannibalized everything except that movie that—in a funny way, I think there’s only a TV business. What I mean by that is if you can put it on the television for 30 seconds, or 15 seconds, and sell the concept, then you’ve a chance of people going to the movie. And if you can’t do that, you don’t seem to exist anymore. So it seems to be coming down to a TV business.

Q: Will smaller movies be relegated to the internet with only tentpole and event pictures on the big screen?

A: I’m not sure. I hope not. I think that somebody should try an alternative distribution system. Weekend is killing us. It’s just mashing everything into who can survive. It’s like the Roman amphitheater with the weekend. You got two gladiators battling each other’s heads to death.

Q: Can any of this be read as a sign that the audience’s appetite for being challenged has subsided?

A: I think they want event movies, and kind of like if you’ve seen “Precious,” which is a wonderful insane performance by Mo’nique, y’know, they seem to—I suppose they want things that are out-there, or outlandish and beyond the normal. I think the appetite for normal drama has diminished a lot. But for extraordinary events, I think there’s probably still an appetite.