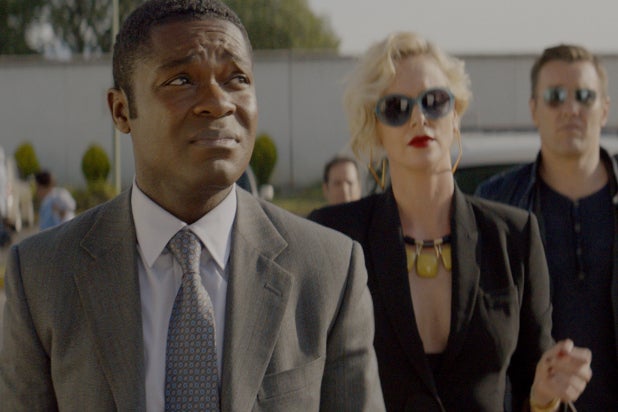 The cynical action comedy “Gringo” aims right for an imagined sweet spot where “Midnight Run” and “Ruthless People” meet, get drunk, and roll “Fargo” in an alley somewhere. But this wildly uneven mix of nasty and nervy — which drops a hapless corporate Everyman played by David Oyelowo into a pinging kidnap scenario in Mexico — is primarily a time-waster, trotting out clichéd misadventure tropes and predictable zigzags in a manner neither terribly funny nor suspenseful.

Shot two years ago from a script written years prior, which would explain why its drug kingpin character is named The Black Panther (oops!), one imagines “Gringo” is getting released now because an executive somewhere found it behind a couch, gathering dust, and felt sorry for it.

“Selma” star Oyelowo plays Harold, an operations supervisor at a Chicago-based pharmaceuticals company called Promethium; in movie terms, he looks ready to accept his award for Milquetoast Employee of the Year. He raps along to “Gettin’ Jiggy Wit It” in the car, has a beautiful wife (Thandie Newton, clocking in) bleeding his bank account dry, and might just lose his job if a rumored sale to a conglomerate goes through.

Harold can’t quite accept, however, that his buddy Richard (Joel Edgerton), the company president, wouldn’t look out for him in just such a case. Richard’s so openly jerkish, however, that it makes Harold seem woefully deluded, an early sign that the movie might be mistaking beleaguered for thick-headed.

Harold wises up on a business trip to their company’s lab in Mexico, accompanied by Richard and co-president Elaine (Charlize Theron), a porcelain viper who takes one look at the photo wall of many smiling brown children in the office of their lab manager Sanchez (Hernán Mendoza) and snarls, “Do they not sell condoms down here?” (In this movie’s humor math, a racist joke is okay if uttered by a sexy, white Oscar winner.) Harold indeed learns, surreptitiously, that he won’t survive the upcoming merger.

But Richard and Elaine have another secret up their sleeves, and it’s the real purpose of their trip: to pressure Sanchez to cut off a longstanding off-books relationship with a cartel king — the aforementioned non-Marvel big cat (Carlos Corona, “Cantinflas”) — so that Promethium will look squeaky-clean for its impending sale.

Our hero’s planned revenge for his own problem, which involves enlisting a pair of local motel employees for a fake kidnap scheme that would trigger the company’s insurance payoff, sets a rapidly escalating chain of violent events in motion that could offer a real chance for Harold to escape his life.

As appealing an actor as Oyelowo is, though, it’s nearly impossible to care about Harold’s predicament because the movie (its haphazardly constructed screenplay credited to Anthony Tambakis and Matthew Stone) has little finesse when it comes to characterization, plotting or eccentric action. It’s one of those movies in which the kingpin’s professed love for the Beatles in one scene spells certain death later on when someone stupidly disagrees with his music tastes. (The question never gets old: Don’t people in movies see movies?)

Randomness and coincidence is integral to the architecture of “Gringo,” and director Nash Edgerton (Joel’s brother) cares little for whether it makes sense or not. Sharlto Copley’s a reliably gritty presence, for instance, but does his ex-mercenary aid worker, hired away from Haiti to find Harold in Mexico, also have to be the boss’s brother? I’m still trying to figure out the purpose of Harry Treadaway’s and Amanda Seyfried’s characters, a pair of dating LA guitar shop workers whose own Mexican trip conveniently coincides with everything in the movie for no believable purpose. (Feel a twinge of regret, if you will, for what this movie says about Seyfried’s career.)

Elsewhere, Joel Edgerton looks confused as to whether his character is mean-funny, or dumb-venal, or just bored. Theron, on the other hand, is fully committed to the retrograde schlock of her sexually rapacious and willfully cruel boardroom villainess, as if she’d bathed in a perfume called “Network” just for the sexist trolls in the audience.

For a movie with such a blinkered view of humanity, one that only draws attention to Harold’s Nigerian ancestry so it can let us know his uncle scammed people with prince letters, it’s almost surprising how hard it tries to cobble together a happy ending for its good characters, and just desserts for its baddies. It’s the rare dark comedy that ultimately feels insecure about its dim outlook.

And what of the country where “Gringo” is mostly set? Mexico deserves better, surely, than a bunch of corrupt characters, none of whom even make the poster. On second thought, maybe that’s a good thing for the land where this movie goes to die.