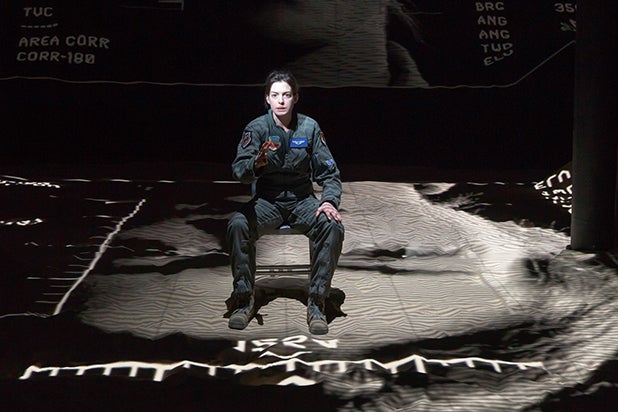 If you had problems accepting Anne Hathaway as a biotechnologist in the movie “Interstellar,” you will probably have problems accepting her as a fighter pilot in George Brant’s new play, “Grounded,” which opened Sunday at the Public .

As an actor, Hathaway can be described as legally brunette – that is, she comes from a place of entitlement, and her best screen performances (“Brokeback Mountain,” “The Devil Wears Prada”) play off that air of superiority. Hathaway may be trying to bring her persona down a notch, because in “Grounded” she walks on stage wearing fighter-pilot green, and what immediately impresses is that she has borrowed something from her “Interstellar” costar.

Why is Hathaway speaking with Matthew McConaughey‘s country twang? Brant doesn’t give her lines like “all right, all right, all right,” but her fighter pilot does swear a lot and refuses to take a very reflective view of anything – and that includes her job of killing people in the distant deserts of the world. This bring-it-on ethos gives Hathaway’s pilot plenty of room to grow once she has been “grounded”; in other words, she gives up “the blue” of flying a plane for “the gray” of a drone’s video screen in some command center in Las Vegas.

This pilot isn’t happy giving up the blue, but she still enjoys killing bad guys. But there’s this disconnect. She wonders, Odysseus never got to go home to his spouse and kid every night after a hard day on the battle field. Why should she?

“Grounded” is a one-person play, and so instead of dramatizing the pilot’s conflict, Hathaway tells us about it. Julie Taymor might be the last director one would expect to direct a solo show, but she brings her usual arsenal of effects to the project. The stage at the Public in New York resembles a desert vista in Anthony Minghella’s film “The English Patient.”

It’s the splendid work of set designer Riccardo Hernandez, who has carefully swept sand into endless waves of mini dunes. Peter Nigrini’s projections and Christopher Akerland’s lighting that turb sand into everything from Vegas marquees to a digital clock and then back to a desert. And Elliot Goldenthal has created not only the original music but something called “soundscapes.”

The production is effective and often dazzling. It does what it’s supposed to do: take us inside the pilot’s mind.  But like so many one-person plays, “Grounded” skimps on relationships. This character is many things, but she is not a solo act. In fact, as Hathaway keeps telling us, her pilot is a member of many communities — her fellow pilots, the other drone operators and her family ever come, none of whom ever come to life on stage. Taymor’s staging lets us know that the pilot is separated from everyone else by technology, but it’s the play and the performance that separates her from the audience.