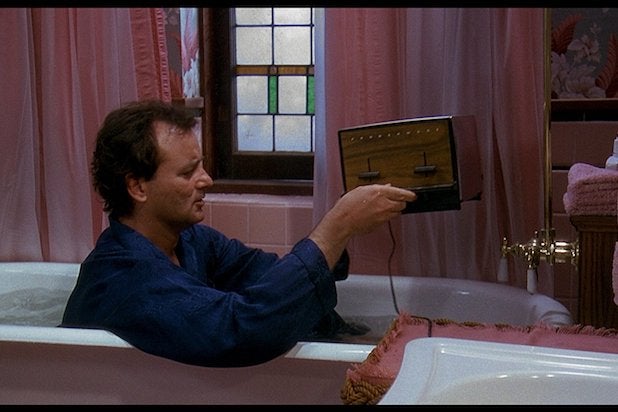 Here we go again. The concept behind “Groundhog Day” is perfect in its simplicity. A sarcastic, narcissistic man finds himself stuck in a time loop of the same day, Groundhog Day, until he becomes a better person.

But more than a quarter century after the 1993 movie’s release, producer Trevor Albert and screenwriter Danny Rubin had the same horror story about the film’s development that other filmmakers have dealt with over and over again.

“Somebody whose name I won’t say said, ‘Why does the day repeat? Why the hell … I like it, it’s good, but I don’t understand why he gets stuck in this loop,” Albert told TheWrap about an executive at Columbia’s note regarding the script.

There’s no specific reason given for why Phil Connors (Bill Murray) is caught in the time loop. “Groundhog Day” succeeds because the screenplay doesn’t pander to the audience by providing an explanation, and it avoids the need for Phil to spend the movie constantly chasing some meaningless goal.

But that reasoning wasn’t good enough for the studio.

“‘Is it aliens that put a hex on him or what the f—, does he fall into some weird chemical?'” Albert recalled being asked. “They wanted some tangible event to occur in the first act that shows someone has put a spell on him. And that was like, ‘f— no.’ There’s no freaking way. That really is pandering to the audience.”

Rubin dreaded the day that he would get word from the studio that his screenplay needed to be rewritten, knowing they would want a reason for Phil’s affliction. He preemptively imagined a wrinkle in time, a mad scientist with an invention gone wrong or even a scorned girlfriend who places a hex on him.

“I played with all these ideas and I said it’s so arbitrary! It’s so stupid,” Rubin told TheWrap. “Why do I have to choose?”

Rubin had already weathered a battle of making his initial draft of “Groundhog Day” more amenable to a general audience. In the first version of the film, the script begins with Phil already repeating the day. “I don’t know when it began. It might’ve been a year ago, it might’ve been 500 years ago,” a voiceover for Phil’s character says in the original draft. You followed Phil and wondered how he already knew everything that would happen. It wasn’t until page 10 that you realized the day was repeating.

But when that idea wasn’t working out, the film’s associate producer Whitney White floated the idea that the movie should begin before the day starts repeating, offering the catharsis of seeing him freak out.

“It didn’t emphasize the same kind of set up that a romantic comedy has … the same level of sentimentality, and Harold [Ramis] brought that to it very much,” Rubin said about his original draft. “He brought a certain warmth to it where I was a little snide or arrogant in the way I presented it.”

“It seemed like a very elegant solution to taking a movie that felt a little indie and making it more accessible,” Albert said. “The studio was delighted by that turn of events. You guys are playing ball with us. You’re making this a little easier for the audience to digest. Ultimately, it wasn’t a compromise. It actually made the script better.”

But the studio refused to green light the movie unless they agreed to write an additional scene explaining Phil’s predicament.

“We were horrified by it, but our solution was, let’s get the scene written. We’ll give it to them, but we’ll put that scene at the end of the schedule, and we’ll never shoot it. Or if we have to shoot it, we’ll never put it in the movie,” Albert explained.

“And then I got the call. The studio, they want a reason. And I’m like, ‘What, a gypsy curse or something?’ And Trevor goes, ‘Yeah! Do that,'” Rubin said. “I was very happy to have Harold as an ally, and Trevor. They both understood that was a better idea than putting something in.”

We got lucky, because as Rubin describes, not answering the question of how he was cursed is, in a way, an “existentially perfect” solution.

“How did any of us get here? We’re born into a life with certain rules, and we try and figure them out and out-smart them and become the victim of them and ultimately, hopefully come to peace with it and find a way through,” Rubin said.

This story was first published on the film’s 25th anniversary in 2018.

You know a movie is special when people describe it as "Groundhog Day" crossed with... something you'd never expect. The Bill Murray rom-com classic has inspired or informed many similar time loop stories. "Palm Springs," which just sold for a record deal at Sundance, is the latest to use the time-loop plot device.