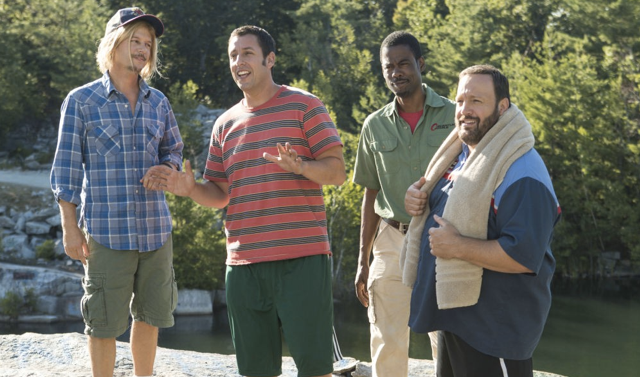 "Grown Ups 2" reserved a place on many major critics 10 Worst Lists when it debuted in theaters on Friday.

The Sony Pictures comedy once again gathers a group of arrested development guys together for a weekend of bonding in scenic New England — Adam Sandler, Kevin James, David Spade and Chris Rock all return, all but guaranteeing themselves a spot at this year's Razzies.

Reviews were blistering. The film eked out an abominable 8 percent "rotten" rating on the critics aggregator Rotten Tomatoes. Here's hoping the Sandler household doesn't get a major American newspaper delivered to the mansion or, you know, use the internet, because finding someone who said something — anything — nice about the movie is a Herculean task.

TheWrap's Alonso Duralde found one silver lining — noting that at least this edition didn't bring back the original film's co-star Rob Schneider for seconds. Sandler and crew, Duralde quipped, are less funny than an inflatable raft that shares the screen with them in two scenes. "Granted, no one is going to 'Grown Ups 2' for the plot, but the jokes here are asinine, immature, offensive to women and to almost everyone else on the planet who isn't a middle-aged heterosexual male," Duralde wrote. "And that's not even counting the continuing presence of Nick Swardson."

Mark Olsen of the Los Angeles Times noted that it looked like the actors were having a good time on screen, but that didn't mean that the audience shared their enthusiasm. It's a film that flirts with having a point, only to abandon those ambitions entirely, the critic wrote.

"Late in the film, Sandler's character bemoans the fact that they are all old and irrelevant, that there should be no more parties for them, just the low-key respectability of family-man responsibility," Olsen wrote. "That concept, and the tension it creates within the male characters, is teasingly just close enough to an actual point to remind that this entire enterprise could have actually been about something besides whether chocolate ice cream looks like poo."

Olsen's notice bordered on respectful. Not so Linda Barnard. The Toronto Star critic gave the film "zero" stars and seemed to want to bathe herself in Purell after watching Sandler and company for an hour and 41 minutes.

"Adam Sandler scrapes the bottom of the barrel – and then he pukes into it – with 'Grown Ups 2,' a lazily cribbed-together swamp of pointless and unfunny sketches that makes 2010’s 'Grown Ups' look like 'Citizen Kane,'" Barnard wrote.

At least Matt Patches gave the film a single star (out of a possible four). However, the Time Out New York reviewer didn't have much good to write about the low-brow jokes.

"In the first five minutes, a deer walks into the star’s bedroom and urinates on his face. It’s all downhill from there," Patches wrote.

Sara Stewart of the New York Post wrote that "Grown Ups 2" is kind of like Richard Linklater's classic "Dazed & Confused" — if that depiction of suburban growing pains offered up lots of lame fart and gay jokes.

"Being a grown-up is tough! Sometimes, just to provide for your kids, you have to take a job that’s tedious, pointless and degrading," Stewart wrote. "Like, for example, a role in 'Grown Ups 2,' the odious Adam Sandler sequel nobody’s been clamoring for."

So did anybody like the sequel? Well, guess what Sony, you owe Entertainment Weekly's Owen Gleiberman a gift basket!

"I don't want to make 'Grown Ups 2' sound like more than the high-spirited formula lark it is," Gleiberman wrote. "But Sandler, working with his regular director, Dennis Dugan (the first 'Grown Ups,' 'You Don't Mess with the Zohan,' 'I Now Pronounce You Chuck and Larry,' etc.), has figured out how to age his brand on screen in just the right way."

Maybe that kind of pseudo-rave can fit on a poster.