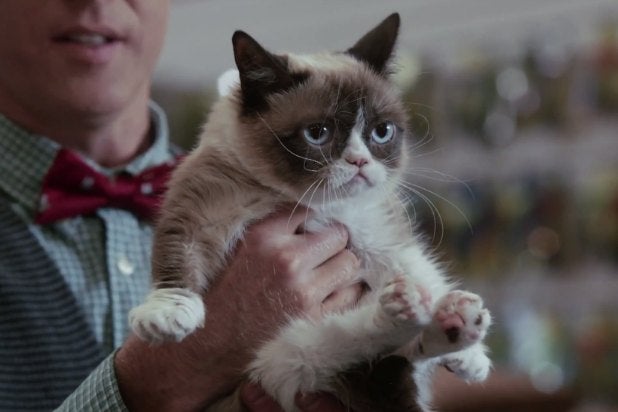 In the opening sequence of the new holiday movie “Grumpy Cat’s Worst Christmas Ever,” the wisecracking kitty and star of the flick promptly informs viewers she prefers the song “I Want A Hippopotamus For Christmas” to the more traditional “Deck the Halls.”

Oddly enough, the 1953 novelty song from child actress Gayla Peevey perfectly sums up the made-for-television offering, which debuts Saturday night on Lifetime. Like the kitschy tune was some six decades ago, Grumpy Cat aka Tardar Sauce is a fluky and fleeting piece of pop culture bubble gum who will fade from our collective memories in a year or two.

So it only makes sense that Lifetime, which is keen on trotting out under-cooked but buzz-inducing fare for ratings and social media mentions these days, would try and get in the Grumpy Cat business before there is no business to get into. The end result is a lopsided, self-deprecating and sometimes funny attempt at anthropomorphic mockery and mirth in time for the holidays.

Comedic actress Aubrey Plaza (“Parks and Recreation”) stars as Grumpy’s human voice and internal monologue. Cynical and droll, Grumpy lives in a mall pet store and because of her less-than-pleasant demeanor and visage, has been purchased and returned twice. Megan Charpentier (“Mama”) costars as 12-year-old Chrystal, the goodhearted pet store volunteer who, after wishing for friendship for Christmas, can suddenly hear Grumpy’s thoughts.

Things heat up at the mall when Chrystal and Grumpy attempt to rescue a valuable dog that could save the strapped-for-cash pet store when a couple of bumbling musicians turned thieves try to kidnap the dog. In other words, “Grumpy Cat’s Worst Christmas Ever” is a cross between “Home Alone” and “Littlest Pet Shop.”

Such similarities make the program easy to watch and enjoy for the most part. Plaza, Daniel Roebuck (“Lost” and “Mob City”) and a couple of brief appearances by comedian Russell Peters, even give the small-screen outing some credibility.

But even as it pokes fun at itself, Grumpy urges viewers to tweet in one sequence and sarcastically derides sappy sentiments in another and Peters plays a mysterious mall Santa with laughable magical abilities — “Grumpy Cat’s Worst Christmas Ever” can’t overcome its low budget action sequences and half-baked conclusion.

There are times when Grumpy and the movie’s writers are in on the jokes and there are times when they clearly are not. Those are the moments that serve as jarring reminders that despite valiant and humorous attempts, this is a bland, B-level, basic-cable special that people will watch and forget before the credits roll.

It’s not as bad as “Sharknado” and it’s not as enjoyable as “A Christmas Story”. And in a crowded landscape full of pine-tree scented TV options, “Grumpy Cat’s Worst Christmas Ever” needs to be much better or much worse than it is.

That said, if you’re looking for something to tune in to while you work on your holiday cards, knit a snowman scarf or catch up with friends on Facebook, Grumpy and her movie will give you just enough one-liners and laughs to pass the time. That’s what bubble gum is for.