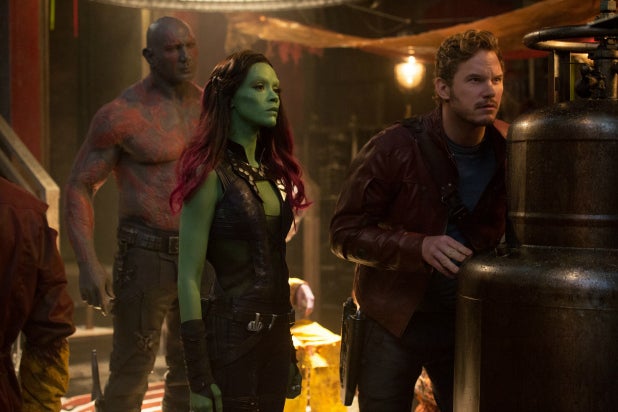 Take the Dirty Dozen, subtract the Magnificent Seven, and you’ll roughly get the membership of “Guardians of the Galaxy,” a surprisingly winning space-faring adventure with a group of Marvel Comics characters led by Chris Pratt in a breakout action-lead performance.

Taking place in the far-flung outer-space territories of the shared universe created in the Marvel Studios movies (“The Avengers,” “Captain America: The Winter Soldier,” et. al.), “Guardians of the Galaxy” takes a B-team of lesser-known comic-book heroes — no familiar faces like Thor, Wolverine or Iron Man here — and, thanks to director and co-writer James Gunn (“Slither,” “Super”), wrings pulpy, roguish space-opera fun from them.

The film in fact owes as much to the space-faring fun of Joss Whedon‘s “Firefly” and “Serenity,” with its blue-collar approach to traveling the cosmos in search of profit, than it does to the other Marvel movies, and that’s a good thing: Unlike the stiff-jawed heroics of the other Marvel films, this feels a little looser and lighter, with Pratt as charming, amoral accidental leader Peter Quill, an earthling among the stars who, as he will tell you, is also known as the roving brigand “Starlord.”

The fact that Pratt has to keep reminding people of his code-name is, of course, part of the fun, and there’s a lot of fun to be had, especially as the film brings its team of semi-heroes together. “Guardians” has a little more space for irony, goofiness, and sarcasm than the other Marvel movies, which Gunn and co-screenwriter Nicole Perlman relish in exploring with great one-liners and running gags.

The film also has many of the structural flaws of the other Marvel movies — no modern “house style” has become as much of a double edged sword. All the Marvel films look clean, are shot relatively well, and are, to a one, both overstuffed and underwritten, full of too many characters in search of too many McGuffins.

Quill’s roving thieving and looting starts the film, as he finds the cosmic whatsit that bad guy Ronan the Accuser (Lee Pace), an alien religious fanatic, wants so he can rain down death on his people’s ancestral enemies; motivated by both possible profit and something like a dislike of mass murder, Quill winds up assembling an ad hoc team in a space-prison to bust out and get the gadget before the bad guy.

Also read: ‘Guardians of the Galaxy’ Tracking for $60 Million Opening

Joining Quill are Gamora (Zoe Saldana, slathered in green make-up), who’s trying to escape her dad Thanos, the Marvel villain last seen at the close of “The Avengers.” There’s Drax (Dave Bautista, made up in green and red), a hard-to-kill warrior with a sworn vendetta. Also along are Rocket, a CGI creature voiced by Bradley Cooper, changed by science and cruelty into a self-aware being that still looks remarkably like a raccoon, and his pal Groot, another CGI character, a tree-being with durability, toughness, and Vin Diesel‘s voice.

It’s the by-play between the characters that adds to the fun, with Pratt as both the nut behind the wheel and the loose screw that somehow keeps it all together. “Guardians” doesn’t feel like it borrows just from the “Star Wars” films but also from its followers and not-quite peers like “Battle Beyond the Stars” and “Ice Pirates.”

Much like the “Transformers” films, this PG-13 movie’s language and violence put it in strangely adult territory, even as its outlandish action plays out with goofy, giddy fun; unlike that other franchise, however, this movie is actually something human beings might enjoy, with action that’s clear, coherent, driven by character, and easy to appreciate. (In fact, to put it bluntly, the action in “Guardians of the Galaxy” is far, far better than the stagey, straight-on action shooting in “The Avengers.”)

Technical matters are all top-notch, with high marks to cinematographer Ben Davis (“Kick-Ass,” “A Long Way Down”) and music supervisor Dave Jordan, who put together an ace collection of ’70s radio hits (including “I’m Not in Love,” “Hooked on a Feeling,” “Cherry Bomb”) as both a thematic touch and perfect propulsive material for action sequences.

The 3-D is the best on-screen all summer, lively and light and nicely used in action bits inspired as much by Chuck Jones as they are by George Lucas. “Guardians of the Galaxy” will hardly stall or stop concerns that Marvel’s riding a soon-to-pop bubble that can’t last forever, but it still has enough scrappy heart and smart humor to make it seem like the best possible kind of product, one where the talent of all involved makes it easy to enjoy their hustle.