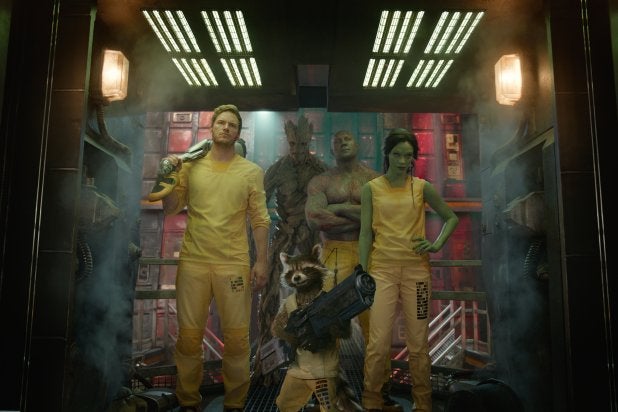 Marvel’s “Guardians of the Galaxy” killed two birds with one stone at the weekend’s box office, earning the No. 1 spot over the holiday and officially becoming the highest-grossing movie of the year. The endearing space comedy is expected to bring in an estimated $21.2 million over the four-day weekend, placing its cume near $279 million and making it the highest-grossing domestic movie of the year.

After its fifth week in release,”Guardians” now outranks Marvel’s other superhero entry, “Captain America: The Winter Soldier,”on the list of highest-grossing movies of the year and surpasses  as the highest-grossing film of the summer. Before exiting theaters, Guardians is expected earn over $300 million domestically, and may finish as high as $320 million.

According to Rentrak, however, the summer box office still ended down 15 percent from last year’s record-breaking season, which included massive hits like “Iron Man 3.”

Also read:  Robert Downey Jr. Thinks ‘Guardians of the Galaxy’ Might Be the ‘Best Marvel Movie Ever’

Last week “Guardians” surmounted the $500 million threshold worldwide and now stands at $547.7 million globally. The film has yet to open in China or Japan.

Paramount’s “Teenage Mutant Ninja Turtles” came in second over the four days with $15.5 million and Warner Bros. teen melodrama “If I Stay” will take third place with almost $12 million.

Also read: ‘Sin City’ Sequel Is DOA as ‘If I Stay’ Tries to Hold Off ‘Guardians’ at Box Office

“As Above” performed within expectations, hitting the $10 million mark, putting the low-budget horror flick in 4th place for the 3-day total and a possible 5th place finish over the four-day weekend. Perdita Weeks, Ben Feldman and Edwin Hodge star in “As Above” which follows a team of explorers who uncover a secret in the catacombs that lie beneath the streets of Paris. It was written by Drew Dowdle (“Quarantine,” ) and John Erick Dowdle, who directs.

Fox’s “Let’s be Cops” scored 5th overall with $8.2 million for the 3-day total and may edge out “As Above” for the entire holiday weekend with an estimated $10.5 million.

Also read: ‘As Above, So Below’ Review: Deserves a Swift Burial

“November Man” opened with $9.8 million and a 6th place finish — analysts had expected the spy thriller to make $10 million. Relativity acquired “November Man” for only $3 million.

Aimed at older audiences, Pierce Brosnan plays a former CIA agent who is lured out of retirement for a final mission to protect a key witness in a case involving Russian war crimes. That puts him at odds with the Kremlin and his former CIA protege, played by . Michael Finch and Karl Gajdusek wrote the screenplay based on Bill Granger’s 1997 novel “There are No Spies,” from his bestselling “November Man” book series. Roger Donaldson directs.

Another release of note over the holiday was “Cantinflas,”which was just edged out of the top ten to place 11th overall. The small Lionsgate release follows the untold story of one of Mexico’s most beloved comedy film stars and earned $3.2 million in only 382 theaters.

“Guardians” performed similarly over the holiday to last year’s top Labor Day film, “ The Butler,” which took in $20 million over four days. The James Gunn-directed space saga starring Chris Pratt, Zoe Saldana and Dave Bautista — with Vin Diesel and Bradley Cooper voicing a talking tree and a heavily-armed raccoon — has enthralled summer audiences and has earned repeat business. Disney, which owns Marvel, now has one of the most coveted prizes that can emerge from summer — a new franchise.

Disney has released three of the top five movies domestically in 2014 with “Guardians” at No.1, “Captain America” at No. 2, and at No.5.