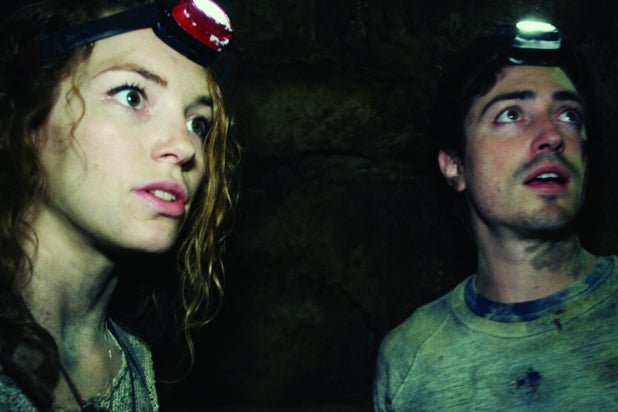 If you did a shot every time the camera held still on an image for more than a few seconds in the new cheapjack suspense film “As Above, So Below,” you’d never get drunk.

Director John Erick Dowdle and cinematographer Léo Hinstin keep their handheld camera style shaky, rattling and rolling throughout, even though most of the movie is supposed to be footage shot by hapless documentary filmmaker Benji (Edwin Hodge), who is following dishy Scarlett (Perdita Weeks) around as she goes on a dizzy quest to find the mythical philosopher’s stone, an alchemical substance that turns metal into gold and also gives its owner immortality.

Also read: Universal Pulls ‘The Loft’ From Calendar, Gives ‘As Above, So Below’ Its Release Date

“I am fluent in four spoken languages and two dead ones,” chirps the enthusiastic Scarlett, who speaks in plummy British tones that mask her heartbreak over her alchemist father’s suicide. She doesn’t speak Aramaic, however, though she assures Benji that she “knows a guy who does”: George, played by Ben Feldman, just as neurotic here as he is playing paranoid copy writer Ginsberg on “Mad Men.”

Though Scarlett once got them both stuck in a Turkish prison for a week, George is quietly smitten with her, so much so that he thinks nothing of breaking into a museum for her so that she can take down an ancient tablet, rub the back with ammonia cleanser, and light it on fire to see if it might reveal where the stone might be hidden. The tablet back tells her that the stone could be down somewhere in the Paris catacombs, a tunnel network underneath the city that houses the bones of six million bodies.

It doesn’t take long before Scarlett realizes that her officious catacombs tour guide isn’t going to just let her wander off into the tombs by herself, but this is only a momentary setback. As luck would have it, a mysterious young boy tells her to go see a guy named Papillon (François Civil), a renegade catacombs expert who lounges around in Paris clubs until adventurous types like Scarlett want to go down deep and see what the tourists never see.

A suspense film set in the Paris catacombs sounds like a good idea for all kinds of scares, but it’s clear from the start that Dowdle isn’t taking any of this seriously. The same cannot be said for the game and luckless cast of young actors, who are so whiny and hysterical right from the start of their plunge into the tombs that they win hearty unintentional laughs throughout. One of the biggest yucks comes when Papillon tells Scarlett that only he can tell her which tombs are evil, even though it seems pretty clear that the tomb filled with random goth girls chanting together is one you would want to avoid.

Also read: ‘Saw’ Returns to Theaters on Halloween in Honor of 10th Anniversary

Along the way, Scarlett picks up a dusty rotary phone that keeps ringing (’cause ringing old phones are way scary), and they all come upon some buried treasure behind a rolling stone that seems to be a visual memory from the old Indiana Jones movies. Toward the end, George tells Scarlett that that week they spent in a Turkish prison was the best week of his life, a line that Feldman delivers with a remarkable lack of enthusiasm.

By the end, the cast is covered in dust and blood, and the audience is chuckling, perhaps in a charitable way. Will any survivors climb out of the catacombs unscathed, and will those survivors put the camera down on the ground in the last shot so that for the first time in the 93 minutes the image isn’t shaking all over the place?

One question that can be answered here: What does the title mean? Scarlett explains it at one point as an old phrase that covers a lot of ground but basically means that what is inside is outside, and what is outside is inside, and what’s here is there, and what’s there is here.

“As Above, So Below”? Here today, gone tomorrow.