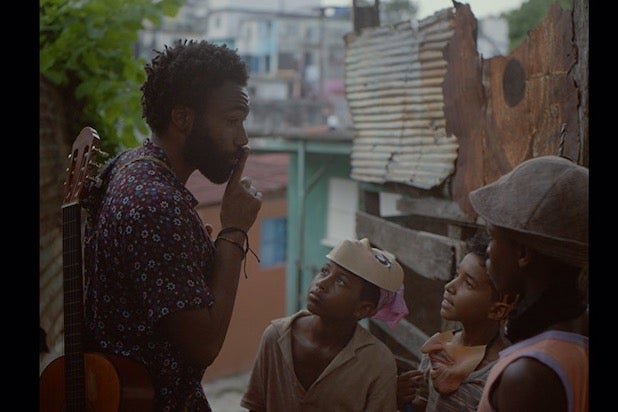 We’ve been hearing teases for months, but ahead of Childish Gambino’s set at Coachella this weekend, fans who aren’t out in the desert will still be able to stream “Guava Island,” the movie that Gambino and Rihanna filmed in secret.

“Guava Island” was shot in Cuba and stars Donald Glover (a.k.a. Childish Gambino) and Rihanna in a tropical thriller set in an island community, in which Glover’s character, a local musician, is determined to throw a music festival on the island. Letitia Wright of “Black Panther” fame and Nonso Anozie also star.

Teases for the movie started as far back as last year when Glover and Rihanna were spotted together in Cuba in leaked set photos. Glover then premiered a trailer for “Guava Island” at his Pharos Festival in New Zealand in November, which also leaked onto Twitter in a fan-shot video. In recent weeks, people heard radio ads on Spotify for “Guava Island” that coincided with the Coachella performance, and Glover finally tweeted a still from the movie earlier this week.

You’re justifiably curious at this point and want to know how to watch it. Thankfully there are a couple of ways to do that:

If you are reading this on a cellphone that hasn’t already died and are camped out in Indio, California early Thursday, “Guava Island” will premiere in a theater specially constructed theater built for the festival and will play there throughout the weekend.

2. Stream it Free on Amazon

“Guava Island” will stream for free on Amazon here for 18 hours on Saturday starting at 12:01 a.m. PST, which lines up with when Childish Gambino will be performing at Coachella. After that time, the film will be available exclusively to Amazon Prime Video subscribers.

At 5 p.m. PST on Saturday, Amazon is also streaming the film on its Twitch channel for one-time only, which you can find here. It’s one hour before its window on Amazon Prime Video closes to the public. YouTube is also streaming the event at the same time as part of their Coachella livestream channel.

“Guava Island” is an hour long, and in speaking to Vanity Fair on Wednesday, Glover’s brother Stephen, who wrote the screenplay, described it as inspired equally by “City of God” and “Purple Rain.” Hiro Murai, who’s a frequent collaborator and director on Glover’s “Atlanta,” but is also the director of Gambino’s “This is America” music video.

They also stressed the importance of shrouding the production in secrecy. According to Vanity Fair, the project was codenamed “Dionysus” and was designed to protect Glover’s “freedom of expression and freedom of process,” the film’s producer Carmen Cuba said.

New Regency financed and produced the film and according to Vanity Fair, Amazon’s Jennifer Salke agreed to distribute the project after watching a brief sizzle reel on a link that expired within 30 minutes of her receiving it.

“Guava Island” was produced by Fam Udeorji, Carmen Cuba, Donald Glover and New Regency, which financed the project. It was executive produced by Stephen Glover, Hiro Murai and Ibra Ake.