On Thursday morning, the streamer announced the drama will premiere Friday, July 29, and shared a first look photo (see above) from the series.

“Surface” hails from creator Veronica West, and is produced by Apple Studios and Hello Sunshine.

In the San Francisco-set series, Mbatha-Raw plays Sophie, “a woman who has suffered a traumatic head injury that has left her with extreme memory loss, believed to be a result of a suicide attempt. As Sophie embarks on a quest to put the pieces of her life back together with the help of her husband and friends, she begins to question whether or not the truth she is told is in fact the truth she has lived. Through twists and turns and an unexpected love triangle, this sexy, elevated thriller asks: What if you woke up one day and didn’t know your own secrets? ‘Surface’  is a story of self- discovery which contemplates if we are pre-programmed to become who we are, or if we choose our own identity,” per a logline from the network. 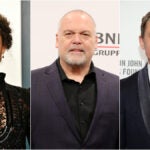 Mbatha-Raw is an executive producer of the series. Joining her in the cast are Oliver Jackson-Cohen (“The Haunting of Hill House”), Stephan James (“If Beale Street Could Talk”), Ari Graynor (“I’m Dying Up Here”), Marianne Jean-Baptiste (“Secrets & Lies”), François Arnaud (“I Killed My Mother”) and Millie Brady (“Pride and Prejudice and Zombies”).

The series is produced for the streaming service by Apple Studios and Hello Sunshine.

Executive producers are West, and Reese Witherspoon and Lauren Neustadter on behalf of Hello Sunshine. Sam Miller (“I May Destroy You”), another EP on the show, directed the pilot and a total of four episodes. Other directors are Kevin Sullivan, Jennifer Morrison and Tucker Gates.