The Academy managed to release its shortlist of foreign-language films on Wednesday without igniting the kind of controversy we’ve seen in years past, when the likes of “Gomorrah” and “4 Months, 3 Weeks and 2 Days” were left off.

This time around, the two-part process – in which volunteers from all branches of the Academy viewed the 65 eligible films, and their votes determined six entries on the shortlist; an executive committee then looked at those selections and added three additional films — left standing frontrunners “Un Prophete” and “The White Ribbon,” and added respected films like “Ajami” and “The Milk of Sorrow.”

Certainly, partisans of the Romanian film “Police, Adjective” could argue that their movie, which has garnered near-unanimous critical acclaim, should have been included. But that film – which details a routine police investigation in excruciating detail, interrupted by two lengthy conversations about semantics – was always a very tough sell with the famously conservative voters.

(For me, the film works well in theory but was difficult to sit through. Is the most boring movie in the world not boring if that boredom is deliberate, and conceptually brilliant?)

What’s left, judging by what I’ve seen from the shortlist (six out of the nine) is a solid cross-section without many quirks, and one in which the dominant films remain the pre-shortlist favorites from Germany and France, Michael Haneke’s “White Ribbon” and Jacques Audiard’s “Prophete.”

The rest of the field includes one of the category’s traditional staples, a World War II drama (“Winter in Wartime”), a near-wordless Asian film (“Kelin”), a coming-of-age story set in the Australian outback (“Samson & Delilah”) and a gritty story of tensions in the Middle East (“Ajami”), among others.

A couple of countries bypassed more acclaimed but tougher films to submit the kind of big, sweeping, old-fashioned epics that once were the category’s stock-in-trade – but it didn’t work, as China’s “Forever Enthralled” and Italy’s “Baaria” weren’t chosen. I don’t know if the film Italy passed over to choose “Baaria,” “Vincere,” would have fared any better, but I’m all but certain that the Chinese film “City of Life and Death” would have gotten a nomination.

And I wonder if the Spanish film board is reconsidering its antipathy to Pedro Almodovar, considering that the film it selected in place of Almodovar’s “Broken Embraces,” “The Dancer and the Thief,” is now out of the running.

The list has nothing too quirky (sorry, Canada’s affecting but kinky “I Killed My Mother”), and little humor; personally, I mourn the omission of the terrific Danish film, “Terribly Happy.”

If there’s a sleeper among the shortlisted films I’ve seen, it might be the Argentinian entry, “El Secreto de Sus Ojos,” which is slick and polished (its director, Juan Jose Campanella, has done numerous episodes of “Law and Order”), but also emotionally affecting.

That film seems clearly to be a selection from the body of voters, along with “Winter in Wartime,” possibly “Kelin” and, I suspect, “The White Ribbon” as well.

The executive committee, for its part, could not afford to leave “White Ribbon” and “Un Prophete” off the shortlist; if forced to guess, I’d say that they didn’t need to add the former, but that they did add the latter, along with “Ajami.” I thought the Peruvian film “The Milk of Sorrow” would be a little too slow and odd for the voters, and would thus need to be a committee selection, though I did hear that its Academy screening went well.

Here’s a guide to the nine films that are left standing, beginning with the six I’ve seen:

Campanella’s first feature in five years (after time spent working in American TV) is part crime drama, part love story and part mystery, shifting back in forth in time as a decades-old murder case summons up old memories for a former police investigator. The film is not groundbreaking or particularly daring, but it is a richly satisfying meditation on memory; if the next round was in the hands of mainstream Oscar voters (which it isn’t; a small, select committee takes over now), I’d call it a shoo-in for a nomination.

The big winner at the recent Australian Film Awards, this contemporary drama follows two Aboriginal teens who are ostracized from their village after they’re blamed for a death. It’s slowly-paced, perhaps too languid and bleak, but evocative of both the desolate rural landscape in which the teens grow up and the unforgiving cityscape to which they flee. I’m a little surprised it qualified (for much of the film, the only language heard in English), but it pays off for patient viewers in striking and unexpected ways.

The widespread international acclaim for Audiard’s hard-edged drama made it a near-obligatory entry on the shortlist, and will likely get it to the next round as well. The story of a resourceful young thug who’s befriended (and exploited) by a mob boss when he’s sent to prison is rough and immediate, distinctly unglamorous and matter-of-fact in its depiction of a brutal world. It might be the best of the shortlisted films (though I’d opt for “The White Ribbon” myself), but it’s not an easy sell to an often-timid voting body.

Impeccably shot in luminous black-and-white, gorgeously composed, leisurely paced and deeply disturbing (or is it deeply disturbed?), director Michael Haneke’s meditation on the evil undercurrents in a pre-World War I German town is not assaultive the way his films “Cache” and “Funny Games” were; the film, Germany’s entrant in the Oscar foreign-language race, makes its arguments for the venality of mankind more subtly. It’s hard to imagine it not making the final five.

The provenance is guaranteed to attract attention: this story of tensions in Jaffa, Israel, was co-directed by an Israeli, Shani, and an Arab, Copti. It’s stark and low-tech, shot in a documentary style and utilizing non-actors in a variety of roles. It’s also tough and tense, with a jumbled timeline that mirrors the conflicting sympathies and familial and national entanglements of the story. It may not be user-friendly enough to win, but there’s no reason to think that the select committee that nominates won’t recognize it as one of the three or four most adventurous and assured entries.

The title refers to a disease in which a mother transmits fear and sorrow to her child through breast milk; in a small Peruvian village, a teenage girl named Fausta believes she is afflicted, and lives her life nearly catatonic with fear. In some ways, the film’s pacing and style takes its cue from Fausta: there’s something hypnotic about it, but it’s also so deliberate, halting and sorrowful that it can be hard to stick with it until the lovely coda. But especially for viewers who know that it’s grounded in a shameful period of Peruvian human rights violations, it may resonate.

And the three I have yet to see:

Bulgaria: "The World Is Big and Salvation Lurks Around the Corner"
Director: Stephan Komanderev

Suffering from amnesia, a young boy tries to discover his identity with the help of his grandfather; apparently, much backgammon-playing and tandem-bicycle-riding ensues. Based on a Bulgarian bestseller by Ilija Trojanow, Stephan Komandarev’s film sounds like the quirkiest of the shortlisted entries. Variety called it “a sweet, old-fashioned intergenerational drama whose uneven pitch distracts from genuinely beautiful moments.”

Here’s an odd one: a film entered in the foreign-language category in which there’s no language whatsoever. Set in the distant past in the snowy Altai Mountains, it deals with an arranged marriage, a pair of suitors, and the usual amounts of love and betrayal, along with what is reportedly a surprising amount of sexuality. Variety called it “a stylish example of the genre … Beautifully shot, amusingly written and handsomely produced, ‘Kelin’ will draw auds looking for a blast of exotica, though there’s not much else underneath the heavy fur coats.” 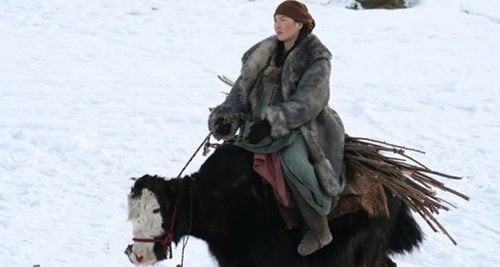 The replacement for another film that was disqualified, “Winter in Wartime” deals with a subject often beloved by voters in this category: World War II. Set in Nazi-occupied Holland, the film follows a teenage boy torn between loyalty to his father (who tries to work with the Nazis) and his resistance-fighter uncle. The film showed recently in Palm Springs, where the Hollywood Reporter dubbed it “one of the most beautifully crafted movies in this year’s race.”