Guillermo del Toro’s “Nightmare Alley” is already getting a rerelease in a special new format. Los Angeles audiences will get the chance to see Del Toro’s ’40s noir film in black & white.

Searchlight Pictures will host a limited run engagement for “Nightmare Alley: Vision and Darkness and Light,” which will be a black & white print of the film screened on 35mm film stock.

The black & white version of the film will run in select repertory and specialty theaters across LA in January, following the film’s release on Dec. 17.

“Although we shot ‘Nightmare Alley’ in color, we lit it as if it were black & white,” del Toro said in a statement. “You can see exactly the same level of design, and we wanted to give viewers this special vantage as a take of the classic noir genre that the film is part of.”

“As a cinematographer, it is a total privilege, a huge artistic satisfaction and a dream come through to have the possibility to tell Guillermo’s amazing story first in a rich and colorful version and then in this beautiful black & white version as well,” added “Nightmare Alley’s” director of photography Dan Laustsen. “When we designed and shot we were always thinking color and black & white. The classic lighting I have used is an homage to all the incredible masters of cinematography who have inspired me.”

“Nightmare Alley” is set in the 1940s and is del Toro’s take on the noir genre, and the film’s story was already once adapted in a 1947 black & white noir film also called “Nightmare Alley,” starring Tyrone Power and Joan Blondell. 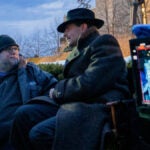 The new film has a script by del Toro and Kim Morgan adapted it from William Lindsay Gresham’s novel. It follows a charismatic but down-on-his-luck Stanton Carlisle (Bradley Cooper) who endears himself to clairvoyant Zeena (Toni Collette) and her has-been mentalist husband Pete (David Strathairn) at a traveling carnival. And he soon uses his newfound skills and success to grift the wealthy elite of 1940s New York Society, convincing everyone that he can commune with the dead. But when he hopes to con a dangerous tycoon (Richard Jenkins), he teams with a mysterious psychiatrist (Cate Blanchett) who might be his most formidable opponent yet.

Below, you can find a list of where and when to watch the black and white print of “Nightmare Alley.”