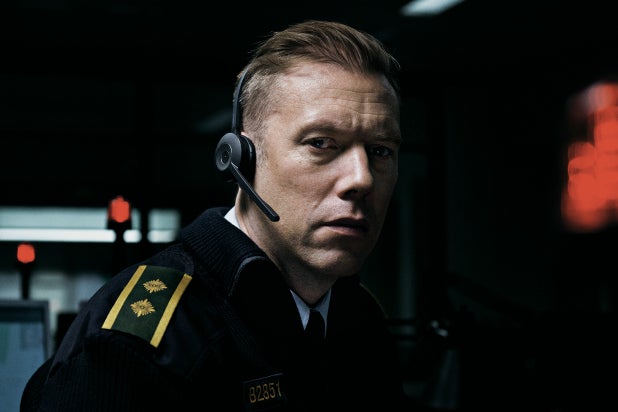 The Danish thriller “The Guilty” is certainly not the first film with a protagonist trapped in a single location: Hitchcock did variations on the theme in “Rear Window,” “Rope” and “Lifeboat,” and more recently, characters have been stuck in a phone booth (“Phone Booth”), a grave (“Buried”) and a car (“Locke”).

But with Denmark’s 2018 Oscar entry “The Guilty,” first-time feature director Gustav Möller has created a crafty cinematic experiment that, for the most part, succeeds on its own terms.

Set in an enclosed room with essentially one actor, and made up entirely of phone conversations, the film employs a full toolbox of cinematic techniques to fashion a complex character study. Lighting, camera angles, production design, editing, and sound effects all conspire to build a mood and contribute to the claustrophobia.

Asger Holm (Jakob Cedergren) is an irritable narcotics cop who has been reassigned to an emergency phone bank as he awaits trial for an unnamed infraction that is revealed in bits and pieces — and finally with a full-throttled jolt — later in the film. Seated in a sterile office, headphones half on, Asger is unmoved by the desperation of his callers. He tells a drugged-out man begging for help that he should have thought of the consequences before he overdosed. Clearly, Asger is in a place, both physically and emotionally, where he never wanted to be.

But the tone instantly changes when he fields a call from a terrified woman named Iben who appears to have been abducted by her ex-husband. All Asger knows is that she’s in a white van going north outside of Copenhagen and that her young children at home may be in danger. Breaking into full cop mode, he keeps her on the line as long as he can as he scrambles to figure out who these people are and where they’re headed. Seeing him at work, Asger is definitely a cop who doesn’t believe in playing by the rules, which is what got him into trouble in the first place.

Möller skillfully ratchets up the tension as the crisis comes into focus through a series of calls from Iben. The action, which we hear but don’t see, is heightened by the sounds of a car door opening, traffic on the highway, rain falling, a police siren in the distance. The film is propelled by our curiosity to see what happens more than a deep involvement with the fate of these people.

But what really holds your attention is the look on Asger’s face, shot from every conceivable angle. The sweat on his upper lip, the fear in his eyes, and the despair of his slumping shoulders allow the audience to feel and see the events the same way he is experiencing them. Unlike most films, where the audience gets to see the action, viewers here are forced to visualize what’s happening for themselves, and everyone will see it differently.

But something else is going on. As the real story of the kidnapping and its consequences becomes known, it presents a surprising parallel to Asger’s own circumstances. As he becomes more involved, the room seems to be closing in on him, and the lighting intensifies. Near the climax he is bathed in red light as he confesses his guilt in order to save Iben. For him, the case has become an act of redemption.

But can a bad cop doing a good thing be forgiven? Möller leaves us with that moral dilemma, making the film more than just an exercise in style. And, at the end, as both Asger and the audience emerge into the light of the real world, they may be asking themselves the same question.