The amount of gun violence in top-grossing PG-13 movies has continued to exceed gun violence that appears in the biggest box-office R-rated films, according to an updated study by Annenberg Public Policy Center (APPC) of the University of Pennsylvania.

The latest study updates findings the group published in 2012 and covers films through 2015.

The new numbers resurface the age-old question, one that still hasn’t been sufficiently answered: Is gunplay in movies a form of permission or even inspiration for such violence in real life? Or is the preponderance of firearms on the big screen simply a mirror of our times?

Researchers can’t help but tie these latest findings to an increase in real-life gun violence in America.

“We know that kids who watch a lot of violence are more likely to be aggressive,” said Dan Romer, research director at APPC. But, he told TheWrap, there isn’t enough money being spent to study the causal relation. 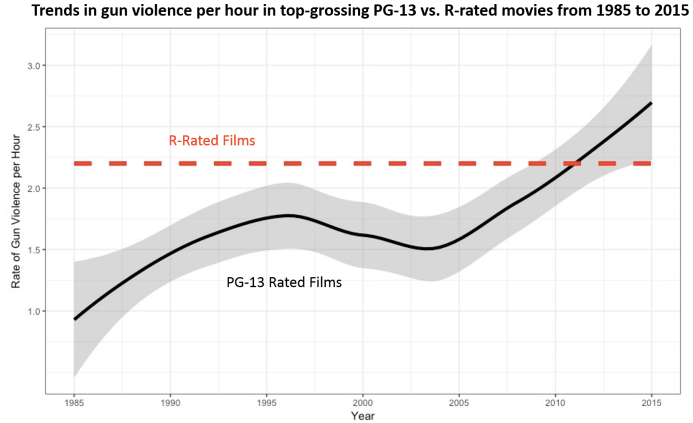 “We know people who see actors smoking in movies are more likely to start smoking, so why wouldn’t we think actors with guns would have the same effect?” Romer said. “Congress gets intimidated by the NRA — they are afraid to go after any evidence that shows guns are bad.”

Add to the list of PG-13 offenders is 2016’s “Suicide Squad,” which wasn’t measured in this latest study but that Romer says is “very violent and uses a lot of guns as weapons and they don’t show the harm.” He’s confident the title will make it in the next round.

The study emphasizes that children of all ages can see PG-13 movies and that films with the rating are notable for “erasure of the consequences” of gun violence, including bloodshed and suffering.

But that’s what happens when guns go off in the real world.

It’s a little more than a week into 2017 and the U.S. has already played host to more than five mass shootings, including the attack on a Ft. Lauderdale, Florida, airport last week that killed five people.

Counting the concentrated rise in gun crimes in Chicago last year, the gun murder rate has actually been relatively unchanged over the past 15 years. But that’s nothing to be proud of, Romer said. Non-fatal shootings have increased in that time, according to the CDC’s National Electronic Injury Surveillance System.

Romer suggests the flat death rate has more to do with medical advances than anything else. “The use of guns is not going down,” he said. “The medical system is better able to save peoples’ lives now. Trauma centers keep people alive at higher rates — especially in cities.”

And on average, there are nearly 12,000 gun homicides in the U.S. every year — more than 25 times the average of other countries — according to CDC figures.

That’s why Romer and his colleagues continue to raise their concerns over the prevalence of such violence on the big screen.

Of course, the bulk of the blame cannot rest on the shoulders of moviemakers. But the disparity in the ratings system — where nudity and sex merit R ratings more readily than gunplay — can seem glaring in times like these.

Also Read: Jennifer Hudson Speaks Out Against Gun Violence: 'This Is Reality for Me'

The Motion Picture Association of America backs its ratings system, arguing it reflects parents’ own concerns. “This system has withstood the test of time because as American parents’ sensitivities change, so too does the rating system,” said MPAA spokesperson Chris Ortman in a statement obtained by TheWrap. “Elements such as violence, language, drug use, and sexuality are continually re-evaluated through surveys and focus groups to mirror contemporary concern and to better assist parents in making the right family viewing choices.”

Indeed, one of the top, most recent offenders among PG-13 movies tabulated in the new study was the highest-grossing movie of all time in North America: “The Force Awakens.” Clearly, American parents weren’t compelled to stop their kids from watching it.

A large number of blaster shots to stormtroopers may not seem as damning as depictions of real-world weaponry, as seen in “Mission: Impossible – Rogue Nation,” which ties the “Star Wars” movie in number of five-minute gun segments.

“It’s more of a fantasy weapon, so one could argue that makes it less disturbing and less likely to instill modeling, having kids think they can do the same thing,” Romer offered.

Other recent PG-13 movies that were noted in the study for their gunplay include, “The Hunger Games: Mockingjay – Part 2,” “Dawn of the Planet of the Apes” and “Ant-Man.” (See the entire list here.)

As for a PG-13 fantasy movie that got it right, Romer pointed to “Doctor Strange.” “A lot of the violence — none of it involved guns,” he said. “I wish Hollywood would go after that format more than it has with other comic book characters.”

“The Continuing Rise of Gun Violence in PG-13 Movies, 1985-2015” is available online at the journal Pediatrics.