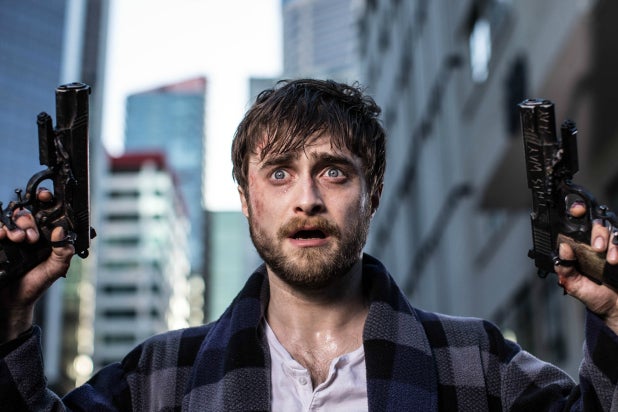 “Guns Akimbo” is kind of fun if you don’t expect more from it than a bratty, gore-soaked sci-fi/action black comedy about a shy gamer who learns to stop worrying and accept that he’s part of an online community full of desensitized players and bloodthirsty trolls.

Daniel Radcliffe stars as Miles, a bland audience surrogate and Nice Guy who learns to enjoy killing strangers in real life after he’s abducted and forced to participate in Skizm, an online fight club. Miles’ adventure isn’t an especially scathing social media critique since it’s set in a not-too-distant future where both cops and internet netizens are so inured to online trolling and explicit violence that the rise of Skizm is just grist for a seconds-long TV news montage.

Writer-director James Lei Howden (“Deathgasm”) makes Radcliffe’s spineless but conflicted hero go through the motions of a slightly-tongue-in-cheek power fantasy narrative, one where a craven zero becomes a righteous hero just by learning to fire the two guns that Skizm’s baddies — led by “Mandy” villain Ned Dennehy — have surgically bolted into Miles’s hands. (Against his will, of course.)

Thankfully, “Guns Akimbo” is mostly bearable thanks to some action scenes that are lively enough and a game ensemble cast, especially Samara Weaving (“Ready or Not”), who plays Nix, a ruthless Skizm player who’s tasked with laying Miles out. So if you like sub-“RoboCop” sci-fi satires like “The Running Man” or “Gamer,” there’s a good chance that you’ll enjoy “Guns Akimbo”‘s smart-ass humor and abundant violence.

Then again, you might be disappointed by “Guns Akimbo” if you expect humor or social criticism beyond the “South Park”-style observation that everybody is either unpleasant and/or delusional. Miles is certainly both, and he doesn’t really learn or grow beyond a general acceptance of his primal instincts. At the beginning of “Guns Akimbo,” Miles is a spineless, asthmatic computer game coder who works on a smartphone game called “Nut Bust 2” (Its tagline: “May contain traces of fun”), and is constantly teased by Zander (Richard Knowles), a stereotypically macho bully who’s defined by his gym shorts and green camo T-shirt.

Miles also has an ex-girlfriend, Nova (Natasha Liu Bordizzo, Netflix’s “The Society”), that he likes but is super-awkward around since she’s physically attractive and he’s a nerd. (Their relationship really is that generic.) Miles vents his pent-up frustration online by becoming a self-described “trollhunter,” reporting and harassing the sort of aimless internet commenters that he thinks he’s better than. So when Miles is forced to go from a passive voyeur to an active Skizm participant, he’s reluctantly thrown into the deep end of a virtual pool into which he’s only ever dipped his toes.

It’s only a matter of time before Miles and Nix join forces to kill Riktor (Dennehy), Skizm’s psychopathic leader. That’s not really a spoiler since a good part of what makes “Guns Akimbo” satisfying is knowing that you’ve seen Miles’s story before in other movies of varying quality, like “The Matrix” and “Wanted.” Howden panders to jaded viewers’ expectations with mixed success, like when Nix tries to bait Miles by asking him why they aren’t exchanging any “banter,” which she calls “obligatory pre-gunfight foreplay.” In another scene, Miles thinks to himself how good it feels not to look at his smartphone since he physically can’t (again: two guns bolted to his hands). “Man, I can’t even remember the last time I walked outside without my face in my phone,” he marvels. “Everything looks so HD.” These are the jokes, folks.

Miles is only worth following thanks to Radcliffe’s tortured but well-modulated performance. Radcliffe’s a talented leading man who behaves (on-screen) like a character actor, which is pretty much exactly what “Guns Akimbo” needs, especially since so many of the movie’s slapsticky jokes require Radcliffe to look exhausted and shocked at the latest perfunctory act of cartoon violence. Radcliffe is especially good in early scenes where Miles tries in vain to turn doorknobs or pick up his phone. His comic timing brings to life otherwise monotonous jokes. (Seriously, he still has guns attached to his hands!)

The same isn’t true for scenes where Dennehy or Weaving beat up anybody who gets in their way, like when she viciously dismantles a heavy with a claw hammer while Rick James’s “Super Freak” plays on the soundtrack. Weaving, in character, jokes about “re-aligning [her opponents’] chakras,” but even she’s not good enough to perk up such a self-consciously corny line.

Thankfully, there’s just enough personality in “Guns Akimbo” to make it a superior piece of low-effort genre filmmaking. Both Dennehy and Weaving are at their best when their characters’ respective deranged personalities are conveyed entirely through facial tics and physical comedy. “Flight of the Conchords” fans will also enjoy Rhys Darby’s cameo as a weirdly zen hobo. There’s also some appreciably over-the-top practical effects, including a few animatronic puppets courtesy of John Nolan (“The Witcher,” “The Dark Crystal: Age of Resistance”), and enough visually dynamic camerawork to make up for some otherwise uninspired action choreography.

“Guns Akimbo” may be too mild to be memorable, but it is a mostly satisfying time-waster.