Academy Award winner Bill Condon will direct a film adaptation of “Guys and Dolls,” the classic Broadway musical and 1955 film of the same name, for TriStar Pictures, according to an individual with knowledge of the project.

John Goldwyn and Marc Toberoff are set to produce the new adaptation for TriStar. Execs Nicole Brown and Shary Shirazi are overseeing for the studio.

In 2019, TriStar purchased the rights to the original short stories written by Damon Runyon that inspired the musical, as well as the Broadway musical book by Jo Swerling and Abe Burrows and its music by Frank Loesser. The studio also bought the remake rights to the 1955 film “Guys and Dolls,” as released by the Samuel Goldwyn Company. 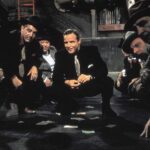 Runyon originally wrote the short stories “The Idyll of Miss Sarah Brown,” “Pick the Winner” and “Blood Pressure” about a gambler and his relationship with a missionary girl. The stories are the loose basis of the plot of “Guys and Dolls,” which is the story of a New York gambler who is challenged in a bet that he can woo a cold missionary girl away with him on a trip to Havana, only for the two of them to fall for each other in the process. The bet is also a secret way to finance a back-alley craps game.

Marlon Brando, Jean Simmons, Frank Sinatra and Vivian Blaine starred in the film adaptation of the film directed by Joseph L. Mankiewicz, and it was nominated for four Oscars.

The musical “Guys and Dolls” premiered on Broadway in 1950 and won five Tony Awards, including Best Musical. The show ran for three years and has since had several Broadway and London revivals. The 1992 Broadway revival — starring Nathan Lane, Faith Prince, Peter Gallagher and Josie de Guzman — was nominated for eight Tonys and won four, including Best Revival of a Musical.

Loesser’s songs have become standards of the Great American Songbook, including “Luck Be a Lady,” “If I Were a Bell, “Sit Down, You’re Rockin’ the Boat,” “A Bushel and a Peck” and the title song.