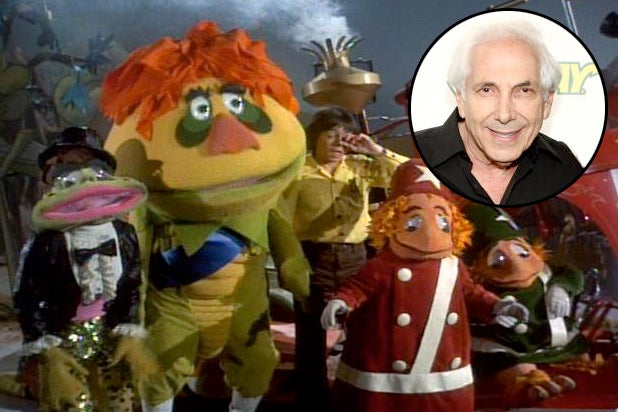 The news that beloved characters from classic children’s show “H.R. Pufnstuf”are making a return to television took the Internet by storm earlier this week, and nobody was more surprised about the huge reaction than the show’s co-creator Marty Krofft.

“I got up at three in the morning to get a glass of water, and ABC News had a whole thing running across the bottom of the screen that said ‘Pufnstuf’ and I said, ‘My god, it’s the middle of the night. Look at what we created,'” Krofft told TheWrap of his experience over the past two days.

It was announced Tuesday that several characters from the 1969 children’s show would be making an appearance on Krofft’s new show, “Mutt & Stuff,” which airs on Nickelodeon.

In an interview with TheWrap on Thursday, Krofft was candid as he discussed a potential movie or series to bring back “H.R. Pufnstuf” proper, the lessons he learned from 2009’s “Land of the Lost” (which was also based on a classic property he created with his brother and producing partner Sid Krofft), and why “The Muppets” revival just isn’t working.

TheWrap: So why bring back H.R. Pufnstuf now?
Marty Krofft: This is a guest appearance on our series “Mutt & Stuff.” We had been developing “Pufnstuf” as a movie and a possible series, but gearing towards a movie. So it’s a guest shot, and then all of a sudden, who knew everyone wanted to know about “Pufnstuf”? Well, I knew, but … I got up at three in the morning to get a glass of water, and ABC News had a whole thing running across the bottom of the screen that said “Pufnstuf” and I said, “My god, it’s the middle of the night. Look at what we created.”

“Pufnstuf” is our baby and “Pufnstuf” will be around probably forever. So whatever we did back in 1969, it definitely worked.

Whose idea was it? How will Pufnstuf interact with “Mutt & Stuff”?
It was my idea. And I said, as long I was doing that, I added stuff to it. The Rescue Racer was an important thing, the fireman’s engine, the Cling and Clang crew drove the Pufnstuf crew around when there was an emergency. Freddie the Flute, I’ll have Puf bring him, and then he brought 2 seeds he’s going to plant as a gift, and they grow up magically and it’s kinda like Sid and Marty talking to each other. That’s the PufnStuf thing.

Also Read: Nickelodeon to Bring 'H.R. Pufnstuf' Back to TV After 45 Years

Is it just one episode right now?
We’re talking about another one, but right now, it’s one.

But we could see more?
I gotta say, yeah, of course. There’s an opportunity. In one of the episodes we’re shooting a movie, so he could be the star or the director, so that’s something we’ve been talking about, but nothing is set at this point. But now that this whole thing is hitting the ceiling, who knows?

What’s the status of the movie and series you mentioned before?
We developed it a number of times and kind of struck out with the writing. We’re going to work on it again, in fact we’re at it now. I can’t talk about what it is, but there are some things in the wind. And the possibility of a series, there’s been several companies that have talked about wanting PufnStuf. From Amazon to probably Nickelodeon. Don’t take that as literal, it hasn’t happened yet!

In terms of a new show, how do you imagine that? Is it set in modern times, in the 60s?
Well I don’t think the original show was set in any time frame. It’s Living Island, it could exist at anytime and anywhere. I think there’s different ways of doing it. The backstory could be that the kid lives in Ohio and he goes to New York and then all of a sudden something happens and it flips into Living Island. But there’s all ways to go, and we have tried them in scripts. Our shows are [so] familiar that you can’t change them too much. If you do, you’ll totally get the fans pissed off.

Now we did that on “Land of the Lost” at Universal [with the 2009 film]. We went extreme on that and it didn’t work. So you have to be careful. “Pufnstuf” is the crown jewel for Sid and Marty Krofft, so we have to be very careful how we do it. It’s a slam dunk to do it, until you mess it up, and we’re not going to do that.

How do you think the landscape for children’s TV now versus when the original show was on has changed? Can you do more? Less?
That’s a good question. In some ways you can do more, in other ways you can’t. The landscape is different. There’s so much product out there, it’s hard to focus in on anything. But we do know what we’re doing, because we have a show that worked. We didn’t have to do three different things to get there, we only had to do one. When you’re a grandparent, you’ll be showing this show to the kids. It’ll live forever. Our shows are evergreen. We’ve only done 13 kids’ shows, but most of them are hits.

Are there any other ones you’re thinking of bringing back?
You know, we’re going to do one at a time. I’m not telling you yet.

“The Muppets” also made a big return this year, and ABC made it more geared towards adults. Could you imagine doing that with some of your children’s show characters?
Well, I told you about “Land of the Lost.” We did that on “Land of the Lost” and we were destroyed. If we were to do another “Land of the Lost” movie we’d do it the right way. I love the Muppets, I love Jim Henson. The show is missing Jim Henson. I wish them well, but I think they went in a totally ridiculous direction. They had all this loyalty out there and I think they might have lost it. I heard the first week it was big but then they lost like 40 percent of the audience the second week. And I understand that. And I feel bad, I wanted “The Muppets” to work. Maybe because it’s Disney, they own it, they’ll just keep going and change it, but I think it could be a problem.

We’re puppeteers, so it’s really just us and the Hensons and believe me, I was rooting for this show to make it.

From 'Mister Rogers' to 'Zoom': 25 Kids Shows Begging for a Revival (Photos)

With the recent news of Nickelodeon’s upcoming “H.R. Pufnstuff” revival, TheWrap takes a look at other classic series primed for a reboot