Ever the showman, director Cecil B. DeMille would eat his cake and have it too whenever he made a Bible picture. Amidst the uplift and morality, DeMille would put in lots of sex, although it was always ostensibly in the service of a spiritual message. “Enjoy all this wicked sinfulness, viewers,” the films seemed to say, “because the Lord will smite these hedonistic orgiasts in the final reel.”

No less a canny manipulator of audiences, Mel Gibson opts for violence instead of sex, creating the only brutal R-rated movies that get recommended from the pulpit of Evangelical churches, first with his global mega-hit “The Passion of the Christ,” which bathed the Savior in more viscera than all previous screen Jesuses combined, and now with “Hacksaw Ridge,” a movie that extols pacifism with one hand while making war brutally exciting with the other.

Gibson used to torture himself in films like “Braveheart” and “Lethal Weapon 2,” but now he does it to his surrogates, this time Andrew Garfield as Desmond Doss, the first conscientious objector to be awarded the Medal of Honor. From the moment that Desmond volunteers to serve in World War II as a medic — but refuses even to touch a rifle because of his Seventh-Day Adventists beliefs — he is subjected to beatings and imprisonment before facing real bloodshed on the battlefields of Okinawa.

But while the film starts with flaming corpses pirouetting through the air in balletic slo-mo, the story begins 16 years earlier in the Blue Ridge Mountains of Virginia, when young Desmond (Darcy Bryce, “Jack Irish”) renounces violence after nearly killing his younger brother with a brick during a scrap in the front yard. He’s also seen the effect that WWI combat has had on his drunken father Tom (Hugo Weaving, chewing through the regional accent like it was made of stale toffee), who regularly beats his sons and his wife Bertha (Rachel Griffiths).

Also Read: Natalie Dormer to Star With Sean Penn, Mel Gibson in 'Professor and the Madman' 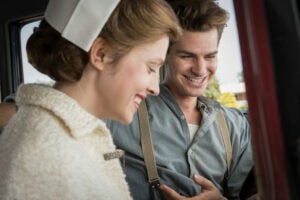 Even though he’s just fallen in love with nurse Dorothy (Teresa Palmer, “Lights Out”) and could get a deferment through his job at a defense plant, Desmond insists on enlisting. The first portion of the film — written by Andrew Knight (“The Water Diviner”) and Robert Schenkkan (“All the Way”) — never met a WWII movie cliché it didn’t love, from Desmond and Dorothy’s cornball courtship to the one-from-every-column makeup of Desmond’s platoon (the Jersey guy, the Polish guy, the twitchy guy, the ladies man, et. al.) to Vince Vaughn‘s barking drill sergeant.

Desmond’s refusal to bear arms gets him in trouble with his captain (Sam Worthington) and nearly gets him court-martialed. That trial doesn’t really read dramatically, since it’s established in the film that Congress had already ruled that conscientious objectors couldn’t be forced to handle weapons, but Desmond eventually shows them all what he’s made of in the titular battle, in which he manages to save wounded soldier after wounded soldier even after the army ordered a retreat.

One can imagine a version of this film being made in the ’40s or ’50s (complete with a tag line like “The Soldier They Called ‘Coward’…Was the Bravest of Them All!”), but then we’d be deprived of the crazily over-the-top ultra-gore and ultra-violence of Gibson’s vision. To its credit, the battle sequences in “Hacksaw Ridge” are breathlessly kinetic, with soldiers getting randomly mowed down from all sides at completely unexpected moments. For all of the thrills and brilliantly-paced carnage, the bloodshed is sometimes so exhilaratingly overdone that it’s like watching a particularly sanguine Monty Python sketch.

Still, working with editor John Gilbert (“The Bank Job”) and cinematographer Simon Duggan (“Warcraft”), Gibson has created some of the most breathtakingly exciting wartime footage in recent memory. They craft a real architecture to this hellish landscape; no matter how chaotic the proceedings, we always know where everyone is in relation to everyone else, and pauses get inserted into the action lest it all become too much to take. (But remember folks, this is a movie about pacifism.)

There are moments, however, when Gibson might have done well to rein in composer Rupert Gregson-Williams (“The Legend of Tarzan”), who’s constantly putting too fine a point on Doss’s heroism in the field. The visuals are telling us what we need to know without the orchestra working overtime to do the same thing.

One also wonders what Japanese audiences will make of the portrayal of their army as being willing to raise the white flag as a bluff, in clear violation of the rules of warfare. Beyond that, they’re certainly shown as a formidable, if faceless, enemy.

The performances mostly get lost in the mayhem, although Garfield certainly commits himself to the character (even though there’s something unmistakably 21st century about his general look), and he has some sweet moments with Palmer before everything starts blowing up. Vaughn delivers wit under fire (literally), and Luke Bracey (the “Point Break” remake) registers as a fellow soldier who goes from disdaining Doss’s cowardice to admiring his valor.

The Christian-victimization narrative, which propelled two “God’s Not Dead” movies to box-office profitability, will certainly draw the faith-based audience to the movie, while the savage brutality will bring in another quadrant entirely. And while “Hacksaw Ridge” is undeniably made with great care and skill, for all of its good intentions it can never refute that famous Truffaut observation that making an anti-war film is essentially impossible, since to portray something is to ennoble it. In celebrating this legendary pacifist, Gibson and company ennoble the hell out of violence.