The Coen Brothers shot “Hail, Caesar!” on seemingly every movie lot in Los Angeles, turning various soundstages, bungalows and screening rooms into the studio of our minds, a manifestation of our collective imagination of Golden Age Hollywood, when moguls chomped cigars, bathing beauties formed kaleidoscopic patterns in oversized swimming pools and gossip columnists lurked behind every palm tree.

Bringing their deadpan absurdism to those final glorious days in L.A. — before stars ran their own production companies and the studios had to stop owning theaters and that damn television box was in every home in America — the Coens revel in both the glamour and the squalor of post-war Hollywood with a film that more than makes up in wit and flash what it might lack in substance.

Studio chief Eddie Mannix (Josh Brolin) apparently never sleeps; if he’s not one step ahead of the cops in getting a starlet out of a risqué photo session, he’s fulfilling seemingly impossible orders from the money men in New York, like casting cowboy star Hobie Doyle (Alden Ehrenreich, “Beautiful Creatures”) in an urbane society comedy directed by old studio hand Laurence Laurentz (Ralph Fiennes). (And if there were another three hours of the increasingly flummoxed Laurentz trying to coax a performance out but out of his depth, Doyle, I’d happily watch it.)

Foremost in Eddie’s mind are the whereabouts of missing matinee idol Baird Whitlock (George Clooney), whose latest epic “Hail, Caesar!” bears more than a passing resemblance to “Ben-Hur,” down to the “A Tale of the Christ” subtitle. Whitlock has been slipped a mickey by some day players who take him to a house in Malibu, where the star finds himself being indoctrinated and held hostage by a cell of Communist screenwriters. 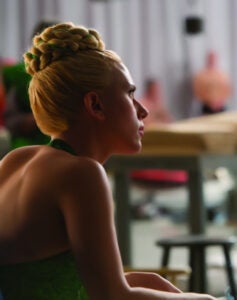 And as if frustrated directors and ransom demands weren’t enough to keep Eddie hopping, there’s aquatic musical star DeeAnna Moran (Scarlett Johansson), whose impending out-of-wedlock pregnancy is starting to show through her bathing suit; lunches with an aerospace executive who’s trying to get Eddie away from the picture business and into a 9-to-5 job; clergy of various stripes who all have script notes for “Hail, Caesar!”; and twin columnists (both played by Tilda Swinton) out for a scoop.

With a team of skilled art directors, not to mention legendary cinematographer Roger Deakins, the Coens have a blast recalling old Hollywood, both in their recreations of actual movie moments (Johansson’s channeling of Esther Williams is a little more dead-on than a tap-dancing Channing Tatum‘s Gene Kelly, but only by a little) and in making this movie look like something from an earlier era. Late in the film, there’s a nighttime shot of Channing where he’s got a skin tone you haven’t seen on screen since Nicholas Ray died.

And in true old-Hollywood fashion, there’s a star being born here: Ehrenreich, whose aw-shucks demeanor in the face of studio duplicity (and hedonism) is consistently hilarious. And heck, he even knows how to jump through a lasso. It’s no easy feat being the standout here — the marquee names are all delightfully funny, not to mention the passel of character actors playing the blacklisted writers — but Ehrenreich’s going to have moviegoers learning how to spell his name.

There’s nothing particularly deep going on, but in a way, the very breeziness of “Hail, Caesar!” makes it the ultimate homage to the studio era. Sure, cinephiles will enjoy catching references to “Vertigo” and “Kiss the Blood Off My Hands,” but overall, this is a bright and goofy valentine to a bygone age of moviemaking.