Between “Arcane,” “Hawkeye” and “Dickinson” all airing on their respective streaming services at roughly the same time this year, Hailee Steinfeld is having herself one hell of a Fall season. And though her characters in each of those shows are unique, she definitely thinks at least two of them would get along famously.

On the surface, Kate Bishop of “Hawkeye” and Emily Dickinson of “Dickinson” might seem wildly different. One is a now world famous 19th century poet and the other is a rich archer in a world of superheroes (though if you ask Kate directly, she might tell you she’s a world famous archer).

But, looking a little closer, they’re actually pretty similar, at least to us. So we had to ask Steinfeld directly: would Kate Bishop and Emily Dickinson get along? And yes, she’s thought about this too — quite a bit, actually.

“You know what? Absolutely,” Steinfeld told TheWrap. “And I will tell you that I’ve weirdly thought about this, maybe not as direct as that, but in going from spending so much time playing Emily Dickinson into the world of Kate Bishop. Emily Dickinson is — this is the longest time I’ve ever spent playing the same character. And when I tell you I went literally from one right into the other, it occurred to me very quickly that these characters are rather similar.” 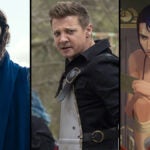 Also Read:
‘The Wheel of Time,’ ‘Arcane’ and ‘Hawkeye’ Are This Week’s Most In-Demand New Series

Obviously, Emily Dickinson was more skilled with a pen than a bow, but really, it’s more about their personalities.

“They’re both these, you know, young heroines in their own right. They’re both incredibly ambitious and disciplined and determined and witty and have an incredible sense of humor,” Steinfeld continued. “And this confidence that really can’t be shaken no matter how many times they get knocked down. So, in short, yes, I do believe they would be friends.”

And for those wondering, yes, Steinfeld is aware of “Steinfall” as her fans have dubbed the season. But it really is a coincidence that all three projects came out at once. It isn’t lost on the actress how cool it is though.

“It’s very hard to put it into words how I feel exactly,” Steinfeld said. “Just overwhelmed in the best way and just so grateful to have been a part of so many incredible things that happened to all come out at the same time.”