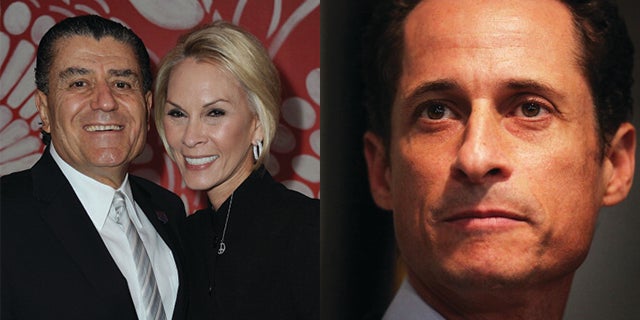 Haim Saban, among a handful of Hollywood figures who've donated to Anthony Weiner's mayoral campaign in between sex-photo scandals, still has faith that he's the best candidate to lead the biggest city in America.

"I would encourage him to stay in the race," the billionaire entertainment mogul told TheWrap.

Saban told TheWrap: "What Anthony Weiner has — or hasn’t — done is an issue between him and his wife. He will make an excellent mayor, and New Yorkers would be out of their minds to allow his indiscretions to get in the way of making the right decision for their city. It’s none of my, yours and anyone else’s business. Because of that, I would encourage him to stay in the race."

Saban gave Weiner's campaign $2,475 on June 21 — a month before the latest sexting revelations — according to the New York City Campaign Finance Board. His wife, Cheryl, also gave the campaign $2,475 that day and another $4,950 on June 26.

Weiner admitted to sexting with women other than his wife after his resignation from Congress for doing the same last Tuesday.

Public sentiment does not seem to follow Saban's logic, however: in the most recent polls, Weiner's lead over second-place Democrat candidate had evaporated since the revelations. He now trails Christie Quinn by nine points.

Other Hollwood figures who donated to Weiner after he resigned from Congress but before the latest scandal include Legendary Pictures head Thomas Tull (who gave $4,950 days before the new scandal broke); Ketchup Entertainment CFO Artur Galstian ($1,000 on July 7); and CAA motion-picture talent head Joel Lubin (who donated $1,000 in May).